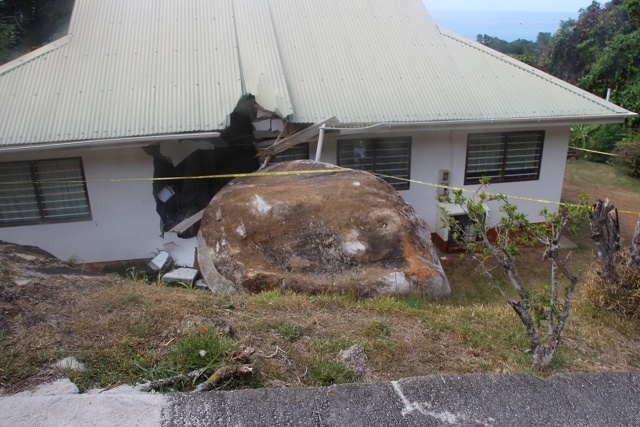 One of the properties that were damaged after part of a boulder broke off and rolled downhill at North East Point. (Department of Risk and Disaster Management)

(Seychelles News Agency) - An expert from Reunion, a French department in the Indian Ocean, was assisting the authorities in Seychelles to assess the risks of boulders at North East Point, in the district of Glacis on the main island.

Anthony Rey from the Geological and Mine Research Office of Reunion worked with the Department of Risk and Disaster Management to decide how best to contain huge boulders that pose a threat to homes in the area.

Rey’s visit came after part of a boulder broke off and rolled downhill, damaging two properties in the small community last month. This prompted authorities to seek foreign expertise after the first assessment by local geologists.

Regina Prosper, senior disaster management officer told SNA on Wednesday.that the expert was in Seychelles until Friday to visit the site, assess the situation and advise the department on whether to break the boulders, if so how to break them or if they can be contained,

Prosper said, “The two geologists, who assisted with the rapid assessment of the cliff above the damaged houses recommended that it was best to take steps to tackle the remaining rocks and remove them completely if possible.”

Before any action can be taken, a detailed assessment of the area must be undertaken.

This is not the first such incident on Seychelles’ main island. South African and French experts were previously called in to assist with the stabilisation of the Ros Gorila at La Batie in the northern Mahe district of Beau Vallon. The first rock fall happened in March 2002.

In a separate incident, French experts were also involved with another big rock at upper Foret Noire in the central district of Mont Fleuri, where nets were used to contain the boulders. Heavy rainfall caused a huge granite boulder above houses to slip and roll down the steep incline in January last year.

General » Be a reporter: Write and send your article » Subscribe for news alert
Tags: Geological and Mine Research Office, Department of Risk and Disaster Management