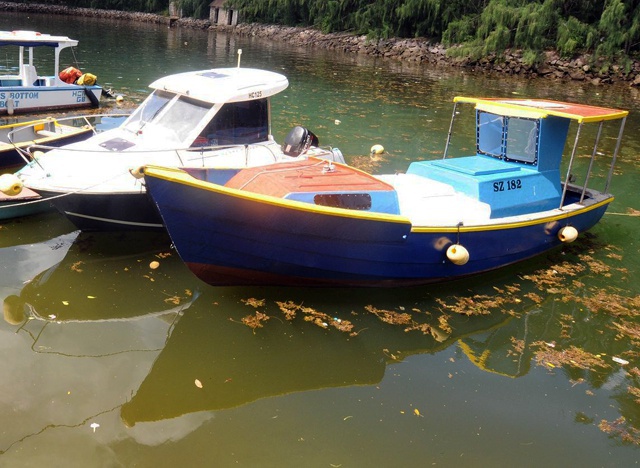 Brownish water at the Port of Victoria taken on May 20 (Joena Bonnelame, Seychelles News Agency)

(Seychelles News Agency) - It has been confirmed that an algal bloom caused the discolouration of the water surrounding Port Victoria in the Indian Ocean archipelago’s capital city last month, the Seychelles Ministry for Environment and Energy has said in a press statement issued yesterday.

The confirmation comes following the results of laboratory tests conducted by the Seychelles Ministry of Health in conjunction with ARVAM Laboratories in neighbouring French-administered Indian Ocean island of Reunion.

According to the statement the discolouration was caused by a reddish-brown coloured organism, Dinoflagellate Procentrum micans, that has been recorded in other parts of the world, but never before in Seychelles.

According to the statement, it is of a variety that is not harmful to fish or humans, although it could cause fluctuations in the oxygen levels of the water.

“Bacterial contamination, which is normally an indicator of fecal contamination, was found to be low in all samples, which leads us to conclude that this was not related to large influx of wastewater from municipal sources,” read the statement.

When the waters surrounding the Port of Victoria turned a brown colour last month the Ministry of environment said preliminary investigation suggested excess nutrients had caused the algal bloom.

“Physico and chemical tests showed some deviation from typical levels encountered in coastal waters. Nitrogen and phosphate enrichment levels were very low, water temperature was elevated in certain areas with an average of around 30 centigrade, and dissolved oxygen level was depressed only inside the port basin,” reads the statement.

The phenomenon has now subsided with the arrival of the south-east trade winds.

Speaking to SNA the Director General for Wildlife, Enforcement and Permits Flavien Joubert said the Ministry believes that the output of wastewater to the partially enclosed basin which remains stagnant within the port area when the sea is calm and the weather is hot is favourable for such occurrence as was the case last month.

It is for this reason that Ministry of Environment says it will be working with the Seychelles Port Authority to “reduce” the amount of water released from fishing fleets in the area and adds that it will be hearing proposals for a proposed wastewater management system for tuna processing giant Indian Ocean Tuna (IOT) later this month.