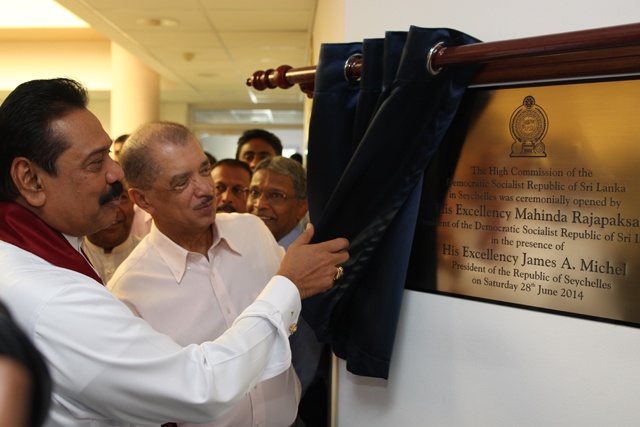 An official with Sri Lanka's embassy in Seychelles said that a report this week indicating that Sri Lanka would move its embassy out of Seychelles is false.

A spokesperson for Seychelles' Foreign Affairs Department, meanwhile, said that Seychelles has not received any official documents from Sri Lanka indicating the removal of its embassy from the island nation.

An article in the Daily Mirror of Sri Lanka this week said that Sri Lanka will relocate its embassy in Seychelles to Madagascar. The article reported that the government of Sri Lanka has decided to focus more on a foreign policy based on commercial diplomacy.

A representative of the Sri Lankan embassy in Seychelles, a group of 115 islands in the western Indian Ocean, told SNA that: “This is completely fabricated news.”

The representative of the embassy said, “Compared to Madagascar, Seychelles has a stronger economy and foreign direct investments, and one of the highest per capita incomes in the region.”

The Sri Lankan embassy in Seychelles opened in June 2014 during the first visit of the then President of Sri Lanka Mahinda Rajapaksa to the island nation. The current resident High Commissioner to Seychelles is Tikiri Herath Gunathilake who was accredited in March 2015.

The Department of Foreign Affairs said it has established a good relationship with Sri Lanka over the years and there is no current reason why the South Asian country should remove its embassy in Seychelles.

Earlier this year, the Seychelles’ President Danny Faure went on a working visit to Sri Lanka and on his final day held bilateral talks with the Sri Lankan President Maithripala Sirisena.

Faure had expressed the need to pursue and develop cooperation in the fields of tourism, agriculture and fisheries with Sri Lanka and to build the momentum to elevate the bilateral relations between the two countries. The visit also helped to consolidate the strong mutual respect and cooperation between Seychelles and Sri Lanka’s leading healthcare facilities.

The Sri Lankan Daily Mirror article said, “According to ministry sources, a new mission will be set up to cover the countries in the West African region, which are former French colonies. It has also been decided to shut down the mission in Poland and open a new mission in Czechoslovakia.”

Sri Lanka has 63 missions overseas in different parts of the world and this is likely to increase under the proposed rationalisation policy.

The Sri Lankan embassy is located in the Seychelles capital, Victoria, in the Capital City Building.