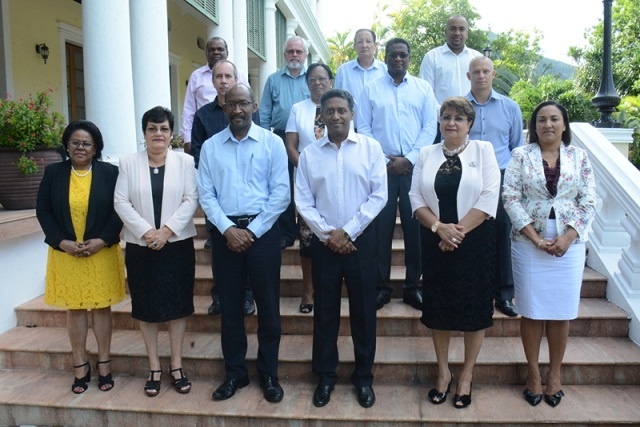 The new cabinet is comprised of 12 ministers. (Seychelles Nation)

(Seychelles News Agency) - The president of Seychelles, Danny Faure, has reshuffled the portfolios of some ministers in the cabinet following a special meeting last week, a communiqué from State House said.

The new cabinet is comprised of 12 ministers.

Myriam Telemaque will be heading the Ministry of Employment, Immigration and Civil Status.

Pamela Charlette takes charge of the Ministry of Fisheries and Agriculture, which was previously headed by Benstrong.

The portfolio of the Designated Minister Macsuzy Mondon has been enlarged and is now Ministry of Local Government and Home Affairs.

Mitcy Larue formerly in charge of the Internal Affairs now heads the Ministry of Youth, Sports and Culture.

Employment has been moved from Wallace Cosgrow's portfolio. He is now in charge of the Ministry of Industry, Entrepreneurship Development and Business Innovation.

The portfolios of other ministers remained unchanged:

“The President also expressed his thanks and gratitude to Minister Idith Alexander and Minister Michael Benstrong for the important contribution they made as Ministers in the service of Seychelles,” the communiqué said.