Before you eat it, snap it – Seychelles Tourism Board launches photo contest 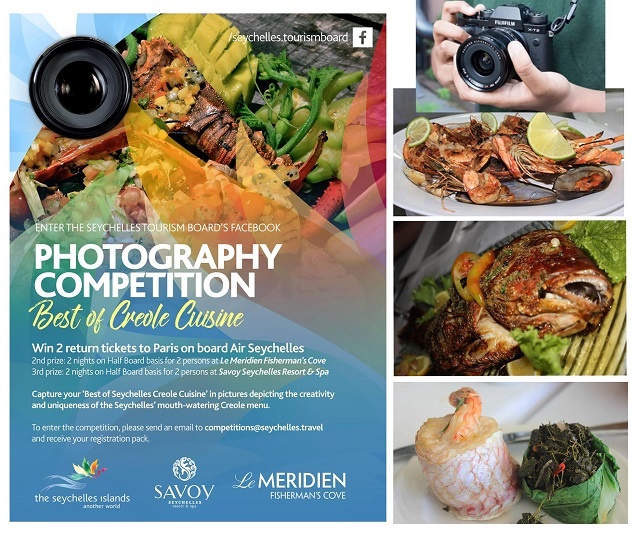 Photographers have until Thursday, August 10 to submit their entries. (Seychelles Tourism Board, Facebook)

(Seychelles News Agency) - The Seychelles Tourism Board has launched a Facebook photo competition in an effort to boost and promote one of the island nation’s unique qualities – its melted-pot cuisine.

Participants entering the competition titled ‘Best of Creole Cuisine’ should focus on capturing the creativity and uniqueness of Seychelles’ Creole cuisine. Seen as one of the island nation's tourist attraction, the Seychellois cuisine is a fusion of flavours from African, Indian, Chinese, French and English cooking.

“We have decided to go with the theme ‘Best of Creole Cuisine’ with the hope of getting a diverse selection of Seychelles cuisine photos from participants,” said Vahid Jacob, the tourism board’s director of Digital Marketing.

To take part in the Facebook photography competition which is organised annually by STB under different themes, participants must be a citizen of Seychelles. There is no age limit.

Interested persons should request a registration pack by sending an email to competitions@seychelles.travel. A competitor’s next move is to like the board’s Facebook page. Participants then can inbox their photo(s) to STB’s Facebook page. An alternative is to bring the photos to the board’s headquarters at the Espace Building, on the outskirt of Victoria.

A maximum of two high-resolution photographs can be entered in the competition per participant. Each entry should be accompanied by a caption, description, the full name of the participant and the place the photograph was taken.

A selection of weekly snapshots will be made by an internal panel at the tourism board.

“Chosen submissions will be placed in an album on the Seychelles Tourism Board’s Facebook page every week, on Thursdays at 2:00 p.m.,” said Jacob.

Each week after the panel has posted their chosen photograph, followers of the page will then have 24 hours to like their favourite image(s). Weekly winners will be photographs with the highest number of likes.

Photographers have until Thursday, August 10 to submit their entries. After the deadline, the weekly winners will be placed in a new album for fans of the page to vote, yet again, for their favourite.

On Friday, August 18, the top three snapshots with the most likes will be declared the winners. The first prize is two return tickets to Paris onboard Air Seychelles. The second and third prizes are two nights on half-board basis for two persons at Le Meridien Fishermen’s Cove and Savoy Seychelles Resort and Spa, respectively.

Submitted photos become the property of the tourism board, which reserves the right to use them in their marketing campaigns around the world.