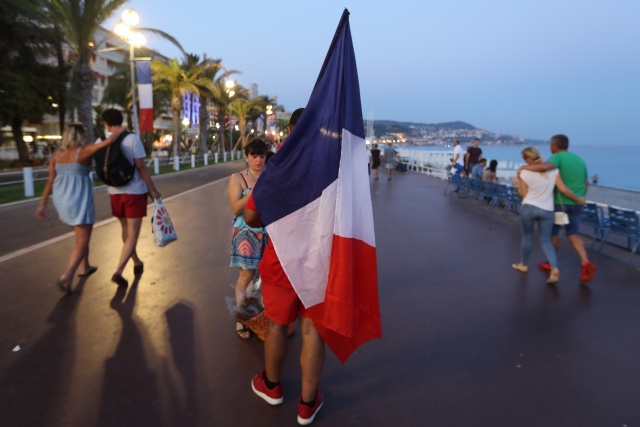 A man carries a French flag on July 14, 2017 on the "Promenade des Anglais" in Nice, southern France, after a commemorative ceremony marking the first anniversary of a jihadist truck attack which killed 86 people on Bastille Day 2016. Bastille Day celebrations were tinged with mourning, as the Mediterranean city of Nice payed tribute to the victims of an attack claimed by the Islamic State group one year ago, where a man drove a truck into a crowd, killing 86 people. (Valery HACHE / AFP)

(AFP) - President Emmanuel Macron and Donald Trump marked France's national day together on Friday at a military parade which clearly delighted the US leader and showcased warming relations between the two men.

But the day was tinged with mourning, coming a year on from a jihadist massacre that claimed 86 lives in the southern city of Nice, where Macron led remembrances after the Paris ceremonies.

Trump was Macron's guest of honour at national day celebrations in the capital as this year also marked the centenary of the United States entering World War I.

The parade featured French and American troops marching down the fabled Champs-Elysees and the traditional flypast of French jets, this year followed by the US aerobatic team along with two F-22 stealth fighters.

US troops dressed in the brown uniform and gaiters of the Great War were among 3,720 soldiers in the parade.

"Nothing will ever separate us," the 39-year-old Macron said from the reviewing stand, adding that Trump's presence by his side was "the sign of a friendship across the ages" between their countries.

"Today our two countries stand taller -- and more united -- than ever," Trump, 71, said in a statement issued by the White House after his departure, which featured yet another muscular handshake between the men, this one lasting a full 25 seconds.

Macron then flew to Nice, where a year ago, a Tunisian extremist rammed a 19-tonne truck through a crowd celebrating Bastille Day along the famous Promenade des Anglais hugging the Mediterranean.

In less than three minutes, 86 people including 15 children were crushed to death and another 450 were injured. Of the dead, 37 were foreigners of 19 different nationalities.

The Islamic State group (IS) claimed responsibility, saying the attack was carried out by one of its "soldiers" -- who was shot dead at the end of his rampage -- though no direct link has been found.

"Our attackers simply want to see us grieve, and you responded with your dignity," Macron said during Friday's observances in Nice, which included a low-key military parade and moving tributes by relatives of the dead.

"We will respond with the merciless fight against terrorism... while also preserving our values, our state of law, the love of freedom and the memory of those who loved freedom fiercely that July 14 evening.

Earlier, the French leader elected in May bestowed awards, including the coveted Legion of Honour, on emergency workers and police who responded to the carnage.

Trump left Paris where Macron on Thursday had rolled out the red carpet for a visit hoping to improve relations and persuade the US president to change his mind about withdrawing from the global Paris agreement on climate change.

Trump said cryptically after their first talks that "something could happen with respect to the Paris accord... but we will talk about that over the coming period of time."

The US leader had appeared isolated at a meeting of top countries last weekend in Germany over his decision to withdraw the United States from the Paris accord. His protectionist stance on trade has also set him adrift.

But warm body language between Trump and Macron seemed at odds with broader concerns about the transatlantic relationship since the former Apprentice TV show host entered the White House in January after an election victory two months earlier.

The two men enjoyed a "dinner between friends" on Thursday at a Michelin-starred restaurant on the Eiffel Tower.

Joined by their wives Brigitte and Melania, they tucked into beef with truffle sauce and warm strawberry and yogurt sorbet, with one of the most celebrated views in the world as their backdrop.

Despite their differences on climate change and trade, the two leaders focused on their close cooperation against IS in Syria and Iraq.

"We are fighting to destroy the terrorist organisations that threaten all civilised peoples and that continue to exact a terrible toll on the French people, including one year ago today," Trump's statement said.

"Together, we will eliminate their safe havens, end their financing and eradicate their ideology."

France has been under a state of emergency since November 2015, when 130 people were slaughtered in a wave of coordinated violence across Paris, with French lawmakers voting last week to extend it for the sixth time.

Terror attacks in France have killed more than 230 people since January 2015. Interior Minister Gerard Collomb says seven terror plots have been foiled since the start of this year.

General » Be a reporter: Write and send your article » Subscribe for news alert
Tags: France, US, diplomacy, attacks