US Senate vote set for next week on Obamacare repeal 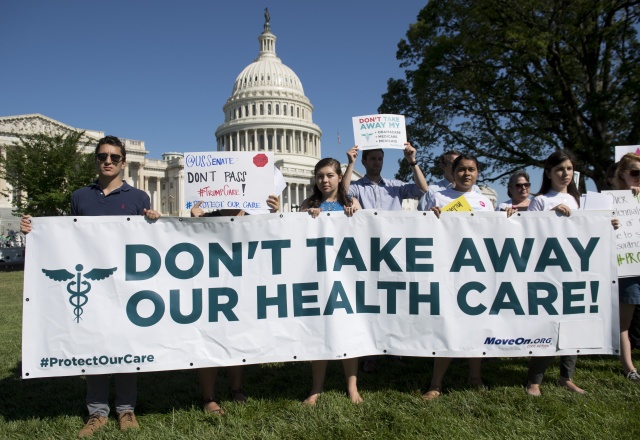 (FILES) This file photo taken on June 28, 2017 shows protesters against the US Senate Republicans' healthcare bill holding a rally outside the US Capitol in Washington, DC. The future of the Republican effort to squash Obamacare hung in the balance July 17, 2017 with Senator John McCain, whose vote is needed to pass the legislation, recovering from surgery away from Washington.There are no votes to spare in the contentious effort to pass a new health care reform bill through Congress, where Republican leaders are desperate to fulfill President Donald Trump's campaign pledge to dismantle the 2010 reforms of his predecessor Barack Obama. So when McCain, 80, announced that doctors in Phoenix removed a five-centimeter (two-inch) blood clot above his eye -- a procedure that experts told US media might be more serious than initially thought -- Senate Majority Leader Mitch McConnell said he would "defer" the upcoming vote on the bill by at least a week.
(SAUL LOEB / AFP)

(AFP) - The US Senate will vote next week on proceeding to a bill that repeals the Affordable Care Act without a ready replacement plan, the chamber's top Republican said Tuesday.

"At the request of the president and vice president and after consulting with our members, we will have the vote on the motion to proceed to the Obamacare repeal bill early next week," Senate Majority Leader Mitch McConnell said.

The vote is expected to fail, as three Senate Republicans have already declared their opposition to moving ahead with the controversial legislation.

Republicans hold a 52-48 majority in the chamber, and can only afford to lose two of the party's senators on the vote. Democrats are united against the measure.

The announcement comes as McConnell's latest effort to repeal and replace the law known as Obamacare imploded, after four senators came out against it.

Several Republican moderates have expressed concern that the measure would adversely impact millions of families, particularly people on Medicaid -- the federal health insurance program for poorer Americans -- and the disabled.

McConnell instead will forge ahead with what could be a last-gasp vote next week on a new plan to kill off most of the 2010 reforms of Trump's predecessor -- without a replacement at the ready.

The measure contains a two-year delay, designed to provide lawmakers with sufficient time to craft an Obamacare replacement plan.

Two years ago a similar straight repeal was passed by Congress, but vetoed by then-president Barack Obama.

The nonpartisan Congressional Budget Office warned at the time that repealing Obamacare would boot a staggering 32 million people off health care by 2026, compared to current law.

That is far higher than the 22 million the CBO forecast would lose coverage under the latest repeal-and-replace legislation.

General » Be a reporter: Write and send your article » Subscribe for news alert
Tags: US, politics, health, Senate