Billions of tons of plastic trash accumulating on Earth 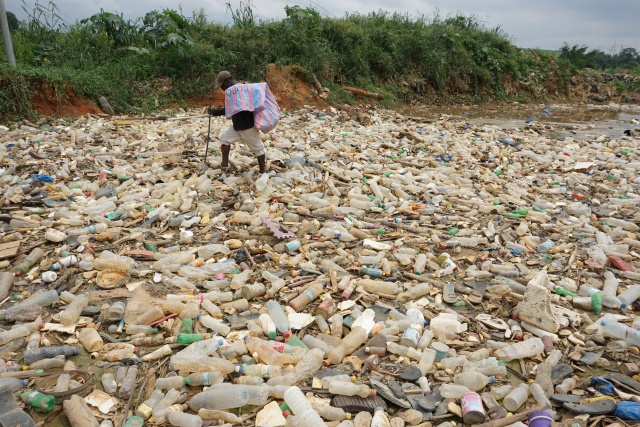 A man walks between plastics bottles in a river near Abidjan in Ivory Coast on May 23, 2017. (ISSOUF SANOGO / AFP)

(AFP) - The world has a plastic problem. More than 9.1 billion tons (8.3 metric tons) of it have been produced on Earth, with most dumped into landfills or the oceans, US researchers said Wednesday.

The report in the journal Science Advances is described as "the first global analysis of all mass-produced plastics," and warns that an even more dire scenario lies ahead.

At the current pace, "over 13 billion tons of plastic waste will be discarded in landfills or in the environment by 2050."

This amount -- which converts to 12 billion in metric tons -- is about 35,000 times as heavy as the Empire State Building in New York City.

"Most plastics don't biodegrade in any meaningful sense, so the plastic waste humans have generated could be with us for hundreds or even thousands of years," said Jenna Jambeck, study co-author and associate professor of engineering at the University of Georgia.

"Our estimates underscore the need to think critically about the materials we use and our waste management practices."

Researchers compiled their data from production statistics for resins, fibers and additives from a variety of industry sources.

The report found that as of 2015, nearly seven billion tons (6.3 metric tons) of plastic waste was generated on our planet.

A total of 79 percent of that plastic waste accumulated in landfills or the environment, including the oceans.

Despite widespread efforts toward re-usability, only nine percent was recycled.

Another 12 percent was incinerated, a process that can also be harmful to the environment.

Recycling is not much help when it comes to plastics, because they do not dissolve in the environment.

None of the plastics in widespread use are biodegradable.

Just over two tons of plastics were produced globally in 1950, when mass manufacturing of the durable material began, said the report.

By 2015, that number skyrocketed to over 440 million tons, outpacing most other man-made materials, with the exception of steel and cement.

About half of the total amount of plastics produced from 1950 to 2015 has been made in just the last 13 years.

While steel and cement are used for years, most plastic is used in packaging -- think plastic water bottles that are used once and discarded.

"Roughly half of all the steel we make goes into construction, so it will have decades of use -- plastic is the opposite," said Roland Geyer, lead author of the paper and associate professor in University of California, Santa Barbara's Bren School of Environmental Science and Management.

"Half of all plastics become waste after four or fewer years of use."

The share of plastics in municipal solid waste increased from less than one percent in 1960 to more than 10 percent by 2005 in middle- and high-income countries.

Plastic debris can now be found in oceans all over the world.

The same team of researchers reported in 2015 eight million metric tons of plastic entered the oceans in 2010.

General » Be a reporter: Write and send your article » Subscribe for news alert
Tags: environment, US, plastics, health, research