O.J. Simpson fate in hands of parole board 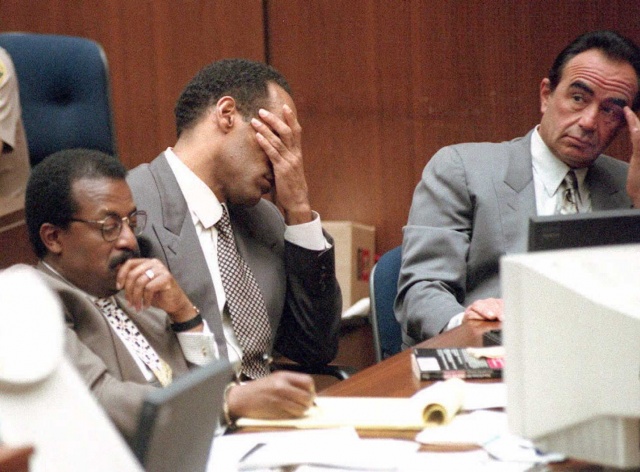 (FILES) This January 26, 1995 file photo shows murder defendant OJ Simpson (C) as he holds his head as defense attorneys Robert Shapiro (R) and Johnnie Cochran Jr (L) listen to prosecutions arguments for sanctions and a delay in the trial in Los Angeles. Former American football star O.J. Simpson has spent nearly nine years in prison. Not for the grisly 1994 murders of his ex-wife and a male companion -- he was famously acquitted in that case.No, Simpson has been behind bars for his role in a September 2007 armed robbery of twosports memorabilia dealers at a Las Vegas resort.He could soon go free. A Nevada parole board will hold a hearing in Carson City on July 20, 2017 to decide whether the former National Football League (NFL) star and actor should be released from prison. (Sam MIRCOVICH / POOL / AFP)

(AFP) - Nine years after being sent to prison for armed robbery, fallen American idol O.J. Simpson is to find out whether he will regain his freedom.

The 70-year-old former football star and actor is to appear before a parole board in the western state of Nevada on Thursday which will decide his fate.

Simpson, who was famously acquitted in 1995 of the grisly murders of his ex-wife and a male companion, has been behind bars for his role in a September 2007 armed robbery of two sports memorabilia dealers at a Las Vegas resort.

A four-member panel of the Nevada Board of Parole Commissioners will hold a hearing in Carson City to decide whether the former National Football League star should go free.

Simpson will not personally attend the 10:00 am (1700 GMT) hearing but will appear by videoconference from the Lovelock Correctional Center, the medium-security prison where he is serving his sentence.

Simpson was convicted in October 2008 of armed robbery, assault, kidnapping and other offenses after he and five associates -- two of whom were armed -- ambushed the two sports memorabilia dealers in a casino hotel room.

Simpson, who earned the nickname "The Juice" during his playing days, claimed he was trying to recover mementos from his career which he said the dealers had stolen.

A Las Vegas jury didn't buy it. Simpson was sentenced to a minimum of nine years in prison and a maximum of 33.

He could be freed as early as October 1 if the board agrees to grant him parole.

"The fact that he is a celebrity will have very little bearing, if any," Wolfson said. "He's not going to be treated differently by the parole commissioners."

Bruce Fromong, one of the victims of the 2007 Las Vegas robbery, told CNN that he planned to testify at the hearing in favor of Simpson's release.

"I never thought that the crime deserved that much time, that long of a sentence," Fromong said.

Orenthal James "O.J." Simpson shot to fame in the 1970s with the Buffalo Bills after winning the prestigious Heisman Trophy as a running back at the University of Southern California.

He retired from football in 1979 after setting numerous rushing records and went on to become an advertising pitchman and actor ("The Towering Inferno, "The Naked Gun").

In June 1994, Simpson's ex-wife, Nicole Brown Simpson, and a friend of hers, Ron Goldman, were found stabbed to death outside her Los Angeles home.

Simpson was arrested after a low-speed car chase through Los Angeles which was broadcast live by television stations, watched by millions and shocked America.

He was acquitted in October 1995 after a racially charged nine month trial, with a verdict that was greeted with disbelief by many Americans.

Simpson was subsequently found liable for the deaths in a 1997 civil suit and was ordered to pay damages totaling $33.5 million to the families of the victims.

General » Be a reporter: Write and send your article » Subscribe for news alert
Tags: US, crime, Justice, Simpson