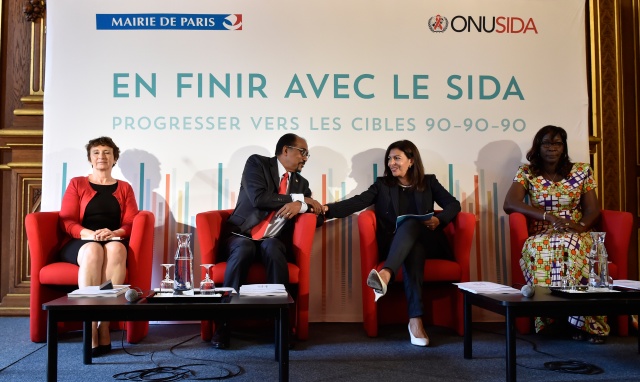 (AFP) - Some 6,000 HIV experts gather in Paris from Sunday to report advances in AIDS science as fading hopes of finding a cure push research into new fields.

In their 36-year battle, researchers have always come up short against the virus' guerrilla tactics -- hiding out in human cells and playing dead only to reemerge and attack as soon as treatment is stopped.

Today's research is about finding ways to keep the virus dormant with as few drugs and side-effects as possible.

And, of course, better ways to prevent infection in the first place.

"Eradicating the virus from someone, where you completely get rid of every single viral particle, is very difficult, if not impossible," said AIDS expert Anthony Fauci, director of the National Institute of Allergy and Infectious Diseases (NIAID) -- a branch of the US government's National Institutes of Health (NIH).

"So what we're focusing more on is... called an ART-free remission," he told AFP -- using the acronym for anti-retroviral therapy.

The new buzzword is "functional cure".

Unlike a traditional cure, where the virus is eradicated, the patient would still have HIV in their system.

But the virus would be so weakened that it cannot replicate, or spread to sexual partners, for a prolonged period of time -- researchers hope permanently -- without the need for daily drugs.

Though much improved since their revolutionary arrival in the 1990s, anti-retrovirals have side-effects which can include diarrhoea, skin rashes, nausea, insomnia and headaches.

And providing a lifelong supply to millions of people is a costly affair.

The World Health Organization (WHO) recommends ART for every one of the 36.7 million people living with HIV today. By 2016, some 19.5 million were getting it, according to UNAIDS.

The cost of treatment, in poor countries, ranges from $85 (74 euros) per person per year, to over $1,200 in cases where the first line of available drugs fail to work.

Worried specialists say the need to switch treatment is now more common as the virus becomes resistant to first-choice medication.

"We cannot afford to keep funding an epidemic of this proportion," said Linda-Gail Bekker, HIV vaccine researcher and president of the International AIDS Society hosting the conference in Paris, where lab scientists in 1983 identified the discovered the virus that causes AIDS.

"The long-term plan is if we can reduce our treatment pool... through remission, then that will be fantastic," she added.

Among the many promising, but as-yet-elusive strategies being probed, is getting people on medication as soon as possible after infection -- seemingly the best hope, especially in newborns, for long-term remission.

Other hopeful possibilities include injections of virus-fighting antibodies, boosting the patient's own immune system with a so-called therapeutic vaccine, or long-acting injectable forms of ARV, experts say.

Only a few people have achieved drug-free remission to date.

They include a group of 14 patients started on drugs in a French trial within 10 weeks of infection, who were able to stop after three years and have stayed healthy for several years since then.

Two years ago, a French teenager was reported to have been in remission for 12 years after stopping her medication.

In the United States, the so-called Mississippi Baby was in remission for 27 months after being given ART for the first 18 months of life, but the virus rebounded in a major let-down for researchers.

"People are realising that no matter what you do, for the most part.... when you stop therapy almost everybody rebounds," said Fauci.

Another research priority is prevention.

As work on a vaccine -- the holy grail -- continues furiously in several countries simultaneously, much research is dedicated to the more immediate challenge of reducing infection through sex.

A far cry from the ABC (Abstain, Be faithful, Condomise) message of the 1990s, the new angle of attack includes such interventions as drug-doused vaginal rings and male circumcision to limit virus spread.

And then there is PrEP -- short for pre-exposure prophylaxis, which involves healthy people taking ARVs as protection.

It is an expensive option, but early trials have shown it does lower the risk.

The July 23-26 conference happens amid concerns that funding for HIV research and treatment programmes may be under threat.

US President Donald Trump has proposed to cut the 2018 NIH budget, for example, and not to increase the life-saving PEPFAR AIDS relief fund.

"Our extraordinary scientific progress against HIV and our ability to address all of the scientific challenges still before us are threatened by a weakening resolve to fund HIV science," said a conference statement.

"HIV is not over," added Bekker.

With 1.8 million new infections last year, bringing to nearly 40 million the number of people who will need life-long treatment, "there is still an epidemic of extraordinary proportions," she said.

"If we take our eye off this ball, we will find ourselves backsliding in scary ways."