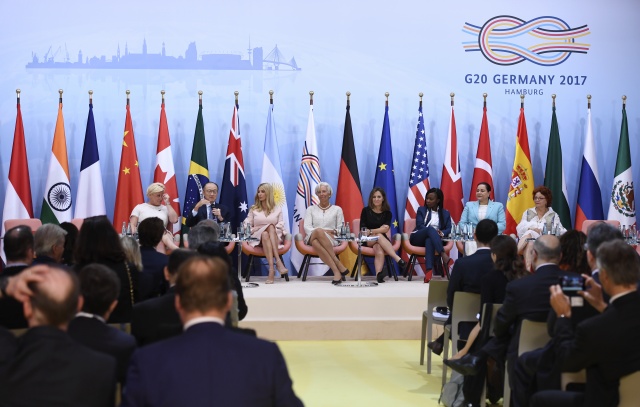 (AFP) - The global economic recovery is on firmer footing as improving growth in China, Europe and Japan offset downward revisions for the United States and Britain, the International Monetary Fund said Sunday.

However, wage growth remains sluggish which risks increasing tensions that have pushed some countries toward more anti-global policies, while efforts to erode financial regulations put in place since the 2008 crisis could erode stability, the IMF warned.

"The recovery in global growth that we projected in April is on a firmer footing; there is now no question mark over the world economy's gain in momentum," IMF chief economist Maurice Obstfeld said.

Presenting the latest update of the World Economic Outlook (WEO), he said "recent data point to the broadest synchronized upswing the world economy has experienced in the last decade."

However, the unchanged forecast masks some significant revisions, including in the United States where the IMF downgraded its growth estimate last month after judging that spending plans promised by President Donald Trump that had been expected to provide a boost to the economy were stuck in limbo.

The US estimate was cut to 2.1 percent for this year and next, down 0.2 points and 0.4 points, respectively, from the more optimistic forecast in the last report.

The outlook for the British economy also was revised down by 0.3 points to 1.7 percent this year on weaker-than-expected activity in the first quarter, while the impact of Brexit "remains unclear."

But those downward revisions were offset by the improving outlook in key economies, including the euro area where growth prospects have improved in France, Germany, Italy and Spain.

The euro area now is projected to see economic growth of 1.9 percent this year and 1.7 percent in 2018.

Japan also is seeing improved growth prospects, with an expansion of 1.3 percent this year expected, although that is seen slowing sharply to 0.6 percent in 2018.

Meanwhile, China continues to be a major engine of global growth, expanding by 6.7 percent this year, and 6.4 percent next, driven by economic policies in Beijing.

The forecast for 2017 was revised up by 0.1 percentage point, "reflecting the stronger than expected outturn in the first quarter" which the IMF said was underpinned by Beijing's "supply-side reforms."

The 0.2-point upward revision for 2018, however, was the result of the expected delay in the "needed fiscal adjustment," which could cause risks down the road.

China's "higher growth is coming at the cost of continuing rapid credit expansion and the resulting financial stability risks," Obstfeld warned in his prepared statement.

But within the mostly upbeat forecasts, the IMF once again sounded the warning on the growing anti-global sentiment, which could leave all economies worse off.

That has been fueled in part by the fact the benefits of increased growth have not been broadly shared.

That "not only holds back the improvement of living standards, but also carries risks of exacerbating social tensions that have already pushed some electorates in the direction of more inward-looking economic policies."

While the report does not specify any country, it comes amid Brexit talks and the Trump administration's continuing focus on "America first" policies, including cutting bilateral trade deficits and backing away from free trade agreements.

The report warned that "policies based narrowly on domestic advantage are at best inefficient and at worst highly damaging to all."

Obstfeld said, "Strengthening multilateral cooperation is another key to prosperity."

Finally, the IMF cautioned that "a broad rollback of the strengthening of financial regulation and oversight achieved since the crisis" -- something the Trump administration is pushing -- could increase the risk to global financial stability.