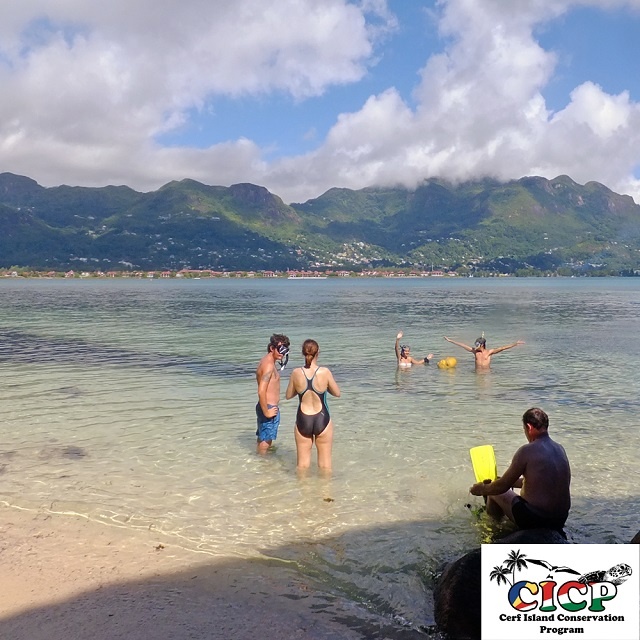 (Seychelles News Agency) - Community initiatives in Seychelles to combat climate change were highlighted this month in a documentary on CNN’s Inside Africa.

The documentary looked at how the island nation’s community, including a tourist establishment, is engaged in the fight against climate change on land and sea, especially against the devastating effects of coral bleaching and land erosion.

Filming for the documentary was done in Seychelles in May with the help of the not-for-profit organisation the Marine Conservation Society. The documentary was aired for seven consecutive days on CNN’s Inside Africa. The first broadcast was on Friday, July 7.

Inside Africa on CNN highlights the diversity of the continent as seen through the prism of different cultures and religions and the mediums of art, music, travel and literature.

The chair of the Marine Conservation Society, David Rowat, told SNA that he was contacted by CNN’s Inside Africa as they had previously done another piece with the branch of the society in the north-eastern African country, Djibouti.

“They wanted to film a piece about how small island communities were dealing with climate change, and I agreed to sort out some options for them to feature as we are involved in several projects and activities that fit their story line,” said Rowat.

The CNN producer talked to the project leader of the Cerf Island Conservation programme, a not-for-profit organisation that has come up with initiatives including guided snorkel and hiking trails, coral restoration and volunteer programmes to achieve their objectives.

Also participating in the edition was the Marine Conservation Society, which promotes the conservation of the marine environment, and Lisa Booyse, the marketing manager of a local tourist establishment -- Chalets d 'Anse Forbans.  Booyse, inspired by local conservation efforts, has joined with people in her neighbourhood to set up the Anse Forbans Community Conservation Programme.

In her interview with CNN, Booyse said, “It won't be an immediate fix. We're looking at a five-year lifespan to get the corals healthy, growing again and plant them back."

She added that "My own generation and generations before, have made a big impact on the environment," she added. "I have to try and lead and make a difference."

The level of coral bleaching in Seychelles in 2016 was almost similar to the bleaching catastrophe which happened in 1998 when up to 97 percent of corals in some areas bleached and caused many reefs around the islands to collapse into rubble.

Nature Seychelles, a not-for-profit organisation, started Seychelles’ first scientific coral restoration programme seven years ago to reverse the trend. Taking corals that had survived the 1998 bleaching, the organisation grew over 45,000 fragments of corals in underwater nurseries and planted a degraded area in the Cousin Island special reserve covering the size of a football field.

Augustin Desaubin – a member of the Community Conservation Programme and a local fisherman -- residing at Anse Forbans on the southern coast of the main island, Mahe -- talked to CNN about fishing from 50 years ago.

“As a boy, I remember the corals were beautiful; plenty of coral inside the reef, plenty of fish. Now we can see only seaweed," said Desaubin.

A local marine scientist, Jude Bijoux, was also part of the CNN programme and said, “We grow corals in a nursery and use these nursery-grown corals to rehabilitate the reef. Due to climate change, only corals most resilient to warm temperatures are selected.”

The Nature Seychelles’ Reef Rescuers’ team who are in the water all the time recently discovered “super corals” that have not bleached at all.

Seychelles, an archipelago in the western Indian Ocean, is more vulnerable to climate change as it is closer to the equator, making the water warmer than neighbours Mauritius and Reunion, an overseas French department.

Seychellois look to the sea for sustenance with an Exclusive Economic Zone of 1.3 million square kilometres.  Fifteen percent of the 93,000 inhabitants are engaged in fishing and fishing-related activities. With the importance of its surrounding waters, Seychelles is putting a lot of emphasis on the conservation of its marine resources.