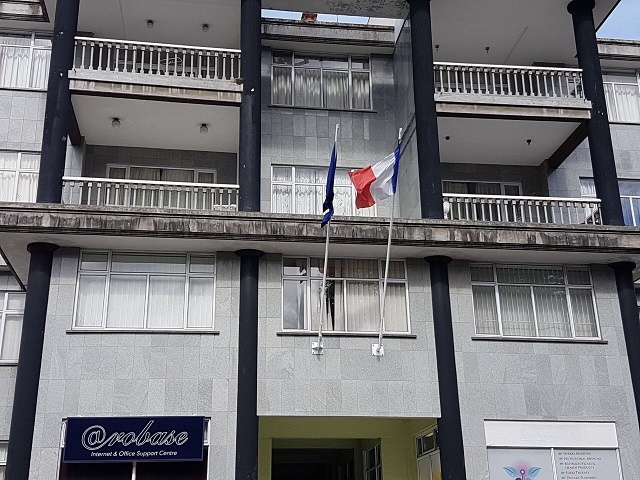 The French Embassy in Seychelles is located on the outskirt of Victoria at La Ciotat Building, 1st Floor. (Seychelles News Agency)

Consular services at the French embassy in Seychelles have been transferred to Mauritius, though that administrative change should have little effect on the Seychellois people, the French Ambassador to Seychelles said.

Ambassador Lionel Majesté-Larrouy said this transfer, which took effect July 16, does not mean the embassy is closing and will not affect the Seychellois people or the French community in Seychelles.

“Since our Seychellois friends do not need a visa to enter the Schengen area, this will not have an impact on them,” said Majesté-Larrouy.

The Schengen Area comprises 26 European states that have removed passport and border controls at their mutual borders. The area mostly functions as a single country for international travel purposes, with a common visa policy.

The ambassador said that: “As for the French almost all administrative transaction such as renewal of passport, visa, and registration of voters on the voters’ register can be done through the internet since these services have been digitalised.”

Majesté-Larrouy said the decision was taken by the Ministry of Europe and Foreign Affairs as part of the modernisation France’s representation abroad.

“In the framework of the modernisation of the French diplomatic channel, France must be able to respond to the challenges of a world in constant evolution and anticipate changes, to keep its effectiveness and global influence,” the ambassador told SNA.

The French consular advisor in Seychelles, Annick Albert, said that it will cost much more for people to travel to Mauritius to get a passport to go to France.

Albert said that she is still in “negotiation with the embassy to ensure a swift transitioning. In any case, France should never think of closing its embassy in Seychelles.”

The consulate in Port Louis will conduct regular tours in Victoria and will meet with those who wish to do their documents.

The basis for French nationals living abroad to vote in elections will continue, and during election period a polling station will be opened in the Seychelles. The certificates of life for people who are unable to move will remain in Victoria, the capital.

Emergency consular protection will continue to be the responsibility of the embassy. In the event of a crisis, the embassy will remain the point of contact.

France and Seychelles, a group of 115 islands in the western Indian Ocean, have diplomatic as well as cultural ties. The French were the first settlers to the islands in the 18th century.

In the rotation plan and appointments of heads of mission abroad in March, Sylvestre Radegonde was appointed as the Seychelles ambassador to France.