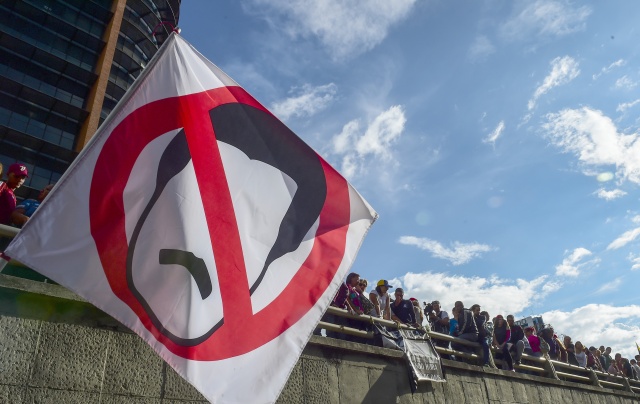 Opposition activists protest in Caracas, on July 24, 2017 Venezuela's angry opposition is pushing for a boycott of an upcoming vote that it dismisses as a ploy by President Nicolas Maduro to cling to power. (RONALDO SCHEMIDT / AFP)

(AFP) - Venezuela's angry opposition is pushing for a boycott of an upcoming vote that it dismisses as a ploy by President Nicolas Maduro to cling to power.

Ahead of next Sunday's election for a 500-plus member assembly to rewrite the constitution and give the president more power, the opposition also plans a general strike -- the second in weeks -- on Wednesday and Thursday and a big protest march on Friday.

It all makes for a dramatic week in the opposition's dogged drive to unseat the socialist Maduro, whom it blames for an acute economic crisis marked by shortages of food, medicine and such basics as diapers, soap and toilet paper.

"Let them lock us all up. The fight must move forward," said Freddy Guevara, the deputy speaker of the opposition-controlled congress.

"The people of Venezuela must fuel the general strike. They must come to Caracas and help us prepare for the civic boycott," Guevara told a news conference. He insisted his supporters will not resort to violence.

"The demand of the people was communicated to Zapatero: that the Constituent Assembly be withdrawn and that the decision of the people be respected," he said, referring to an opposition-organized referendum July 16 that massively rejected Maduro's plans.

Next Sunday's vote is supposed to be for a 545-seat constituent assembly that will draw its members not from political parties but rather social sectors which the opposition sees as loyal to Maduro, a former bus driver who was the handpicked successor of late socialist firebrand Hugo Chavez.

Maduro on Sunday urged the opposition to refrain from violence, respect the voting and let those who wish to cast ballots do so.

"I demand this of all the opposition leaders," Maduro said on state TV.

Maduro's comments Sunday followed a warning the president had issued the previous night about the vote, and how the opposition behaves next weekend.

"We will be relentless if they try to generate a process of violence in order to stop that which cannot be stopped," he said.

During his Sunday TV program, Maduro said that 33 judges whom the opposition-controlled congress designated Friday as a sort of shadow Supreme Court would be arrested. One of them had already been detained Saturday.

The opposition says the current top court is packed with hardcore Maduro loyalists. Many of its justices were hastily appointed shortly before Maduro's ruling party lost its majority in congress in 2015 legislative elections.

The Supreme Court said that by swearing in shadow judges, congress overstepped its bounds and committed treason.

Of the 33 shadow justices, Maduro said: "One by one, one after another, they will all be arrested. All of them will have their assets and accounts frozen, all of it. And no one is going to defend them."

Opposition leader Julio Borges wants talks with the government -- but only after Maduro drops the constitutional change effort.

"Get on the right side of things and let's work on an agreement," Maduro said Sunday, warning: "The Constituent Assembly is happening."

Maduro has presented his Constituent Assembly as the only path to peace and prosperity. But he has not explained how the body or a new constitution would bring that about.

Opposition members fear that Maduro could adopt communism in a new constitution. The only communist country at present in the Americas, Cuba, is Caracas' closest ally.

Surveys by Datanalisis, a polling firm, have shown that more than 70 percent of Venezuelans reject Maduro's leadership.

The economy is expected to shrink by nine percent this year, said Asdrubal Oliveros of the consulting firm Ecoanalitica. Inflation is expected to top 700 percent, according to the International Monetary Fund.

But the president has brushed aside opposition moves to force him out. He can count on a loyal military, which has been given control of swathes of the economy.