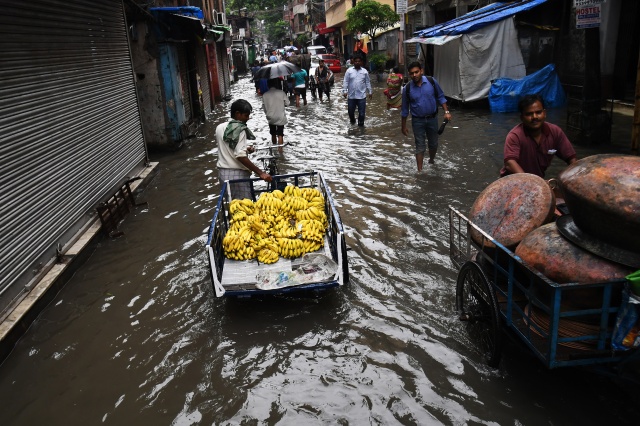 An Indian cycle van puller transport bananas to the market through a water logged street in Kolkata on July 24, 2017. (Dibyangshu SARKAR / AFP)

With scores now dead in monsoon floods across the country, Prime Minister Narendra Modi was to fly over Gujarat later Tuesday to inspect the devastation, officials said.

More than 36,000 people have been moved to safe areas and helicopters and boats were used to rescue the worst-hit.

Torrential rain and the release of water from dams in neighbouring Rajasthan state created havoc in northern Gujarat, a government statement said.

Army and air force helicopter rescue teams picked up more than 1,000 people from villages in the state cut off by rising water levels, it added.

About 80 people are believed to have been killed in Gujarat since the start of the monsoon a month ago, and scores elsewhere in the country.

Gujarat's main city Ahmedabad has had more than 50 centimetres (20 inches) of rain in four days, twice the average for July.

Downpours have wreaked havoc in several parts of the country.

Apart from Gujarat, Arunachal Pradesh and Assam states in India's northeast have been hard-hit, while pockets of the eastern states of Odisha and Bihar have also been affected.

In Assam at least 75 people have been killed and a state-wide emergency relief operation has been underway since April. Tens of thousands of acres of crops have been destroyed.

Thirteen people were killed in flash floods in Jammu and Kashmir at the weekend.