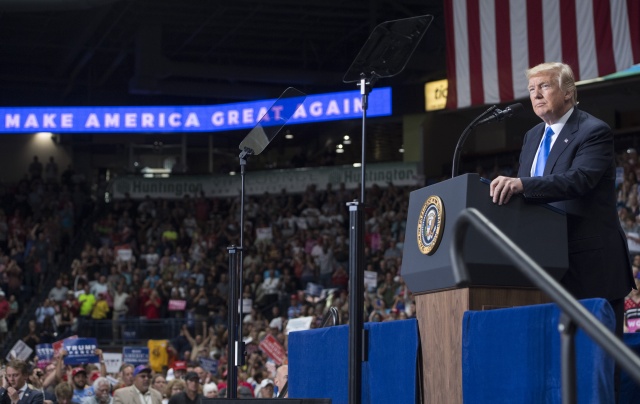 (AFP) - The US House of Representatives voted overwhelmingly Tuesday to impose tough new sanctions on Iran, North Korea and Russia, a move that will antagonize the Kremlin as well as European nations fearing economic ramifications.

The sanctions package, which passed 419 to three after weeks of negotiations, "tightens the screws on our most dangerous adversaries in order to keep Americans safe," House Speaker Paul Ryan said after the vote.

The measure now heads to the Senate, where there is support for sanctions but debate about whether to include penalties on North Korea.

The legislation is the result of a congressional compromise reached last weekend and is aimed at punishing the Kremlin for meddling in the 2016 US presidential election and Russia's annexation of Crimea.

"Left unchecked, Russia is sure to continue its aggression."

But the bill could end up penalizing European firms that contribute to the development of Russia's energy sector.

New sanctions against Iran and its Islamic Revolutionary Guard Corps, which stands accused of supporting terrorism, and North Korea, for its missile tests, are also included in the bill.

Key among the provisions is one that handcuffs the US president by complicating any of the leader's unilateral efforts to ease penalties against Moscow in the future -- effectively placing him under Congress's watch.

Trump has faced accusations that his administration had sought to reassure Moscow that sanctions imposed near the end of the Obama administration could be lifted under a President Trump.

Initially, Trump resisted the legislation. But faced with near-total consensus among Republican and Democratic lawmakers, the White House blinked, but did not say directly that the billionaire president would sign it into law.

"While the President supports tough sanctions on North Korea, Iran and Russia, the White House is reviewing the House legislation and awaits a final legislative package for the president's desk," spokeswoman Sarah Huckabee Sanders said.

In mid-June, the Senate voted 98-2 in favor of tough sanctions on Moscow and Tehran, but the text stalled in the House.

With the North Korea sanctions now included, the new measure would need to be passed by the Senate before heading to the White House, likely before summer break begins in mid-August.

US lawmakers, including Republican leaders, have remained wary of the intentions of the billionaire businessman-turned-president -- who has called for better relations with Moscow -- regarding a relaxation of pressure on Putin.

But even if Trump were to veto the legislation, Congress would likely be able to overcome such a blockage with a two-thirds majority in each chamber.

The Kremlin warned that fresh sanctions on Russia would adversely affect both sides.

"We consider such a continuation of the rhetoric of sanctions counter-productive and harmful to the interests of both countries," Kremlin spokesman Dmitry Peskov said Monday.

From Paris to Berlin, the sanctions bill was seen as a unilateral action by Washington that disrupts a carefully crafted order.

To date, sanctions against Moscow have been coordinated on both sides of the Atlantic, to maintain a united front.

European Union member states were due to meet Wednesday and discuss the issue -- and a possible response.

Several European nations, including Germany, are livid because the new law would allow punishing companies working on pipelines from Russia, for example by limiting their access to US banks.

The provision could theoretically pave the way for sanctions against European partners in Nord Stream 2, a project to build a pipeline carrying Russian gas across the Baltic that could boost supplies to Germany from 2019.

To date, Washington and Brussels had agreed that sanctions would not affect Europe's gas supply.

In an apparent concession, the House modified a provision so the bill only targets pipelines originating in Russia, sparing those that merely pass through, such as the Caspian pipeline that carries oil from Kazakhstan to Europe.

General » Be a reporter: Write and send your article » Subscribe for news alert
Tags: US, politics, Russia, sanctions