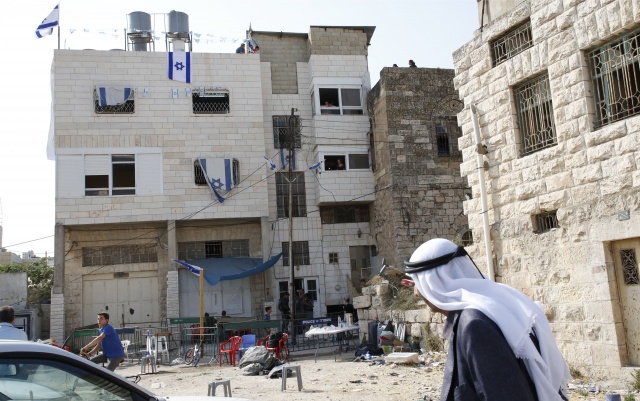 Palestinians walk past a house occupied by a group of Israeli settlers the previous day in the divided West Bank town of Hebron on July 26, 2017. Palestinian residents said settlers had raised an Israeli flag on the roof of the building they had occupied, known to Israelis as the Machpela house. They said the military was in the area and no one was allowed to approach. Israeli settlers were evicted from the same building after occupying it in 2012, as they had not obtained the necessary permits to purchase it. (HAZEM BADER / AFP)

(AFP) - A tense standoff was underway between Israel and Muslim worshippers at a Jerusalem holy site Wednesday despite the removal of metal detectors, with concerns of major unrest later this week if a resolution is not found.

Muslims have refused to enter the site and have prayed in the streets outside for more than a week after Israel installed new security measures at the Haram al-Sharif compound, known to Jews as the Temple Mount.

The measures followed an attack that killed two policemen and included metal detectors at entrances.

Palestinians view the move as Israel asserting further control over the site, which houses the revered Al-Aqsa mosque and the Dome of the Rock.

Israeli authorities said the metal detectors were needed because the July 14 attackers smuggled guns into the site and emerged from it to attack the officers.

Protests and deadly unrest have erupted in the days since, with clashes breaking out around the compound in Jerusalem's Old City and in the occupied West Bank, leaving five Palestinians dead.

A Palestinian also broke into a home in a Jewish settlement in the West Bank last week and stabbed four Israelis, killing three of them.

There are concerns the main weekly Muslim prayers on Friday -- which typically draw thousands to Al-Aqsa -- will lead to serious clashes between protesters and Israeli security forces.

Following intensive international diplomacy and warnings of the potential of wider unrest, Israel removed the metal detectors in the pre-dawn hours of Tuesday.

Cameras installed in the wake of the attack on the police were also removed.

But Israeli officials said they were to be replaced with "advanced technologies" -- widely believed to be smart cameras with facial recognition technology.

Railings installed at the site's entrance before the metal detectors were removed have also remained in place.

The railings and suspicions over what new measures Israel is planning have led Palestinian and Muslim leaders to continue to call for a boycott of the site, and worshippers have heeded the call.

"We leave at 6:00 am and we return after the last prayers around 9:30 to 10:00 pm," Umm Maath, from Nazareth in northern Israel who has been coming with a group to pray outside in protest, said Wednesday.

Palestinian president Mahmud Abbas, who announced a freeze on contacts with Israel last week over the dispute, said Tuesday the suspension would continue until the site was returned to the way it was before the crisis began.

Muslim authorities at the holy compound have been conducting an inspection in and around the site to ensure there were no other changes or damage.

A top aide to US President Donald Trump also arrived in Jerusalem for talks on the crisis on Monday.

UN Middle East envoy Nickolay Mladenov has warned of wider unrest and said Tuesday that "we are not over this crisis yet".

"I hope that the steps being taken by Israel will enable a return to relative calm, and we all hope this will happen in the next days," he said.

The clock was ticking, with last week's main weekly Muslim prayers on Friday having brought the situation to a boil.

Concerned with the potential for unrest, Israel barred men under 50 from entering Jerusalem's Old City for prayers.

Protests and clashes erupted later in the day in Jerusalem and the West Bank, killing three Palestinians. The deadly stabbings of three Israelis occurred on Friday evening.

As tensions rose in the days afterwards, a diplomatic standoff between Israel and Jordan may have helped negotiations on the metal detectors.

On Sunday night in Amman, an Israeli embassy security guard shot dead a Jordanian who attacked him with a screwdriver, Israeli officials said.

A second Jordanian was also killed, apparently by accident.

Israel insisted the guard had diplomatic immunity and rejected Jordanian demands to question him.

The guard and other diplomats arrived home Monday after a deal that a Jordanian government source said also involved the mosque compound.

Jordan is the official custodian of the Muslim holy sites there.

The compound is located in east Jerusalem, seized by Israel in the 1967 Six Day War and later annexed in a move never recognised by the international community.

The third-holiest site for Muslims and the most sacred for Jews, it is at the heart of the Israeli-Palestinian conflict.

It has served as a rallying cry for Palestinians.

Authorities were also keeping a close eye on the flashpoint West Bank city of Hebron, where a group of Israeli settlers occupied a disputed building on Tuesday, boosting tensions.