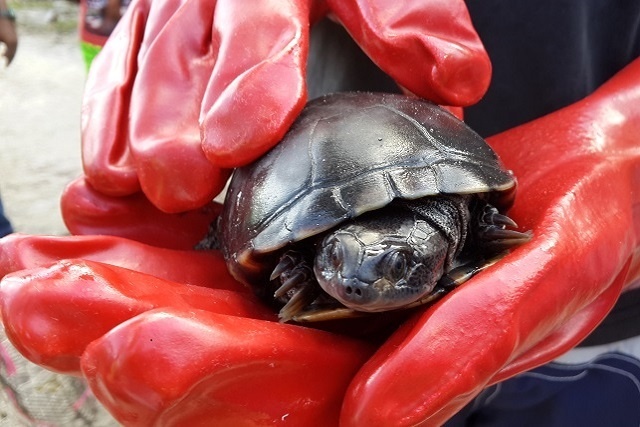 (Seychelles News Agency) - The Seychelles islands are well known for their rich and diverse biodiversity. While many species of the island flora and fauna are endemic, others have been introduced. Among them are the terrapins -- small species of turtles living in fresh or brackish water with a shell length of up to 30 centimetres.

Known locally as “torti soupap” the terrapins are believed to have been introduced from the African continent or neighbouring Madagascar island as a source of food for slaves, but in time, due to lack of habitat, predators and possibly pollution, their numbers have been dropping on most of the islands.

SNA brings you three species of terrapins in Seychelles.

These terrapins are found mostly on the granitic Islands of Mahé, La Digue, Cerf, Frégate, and Cousin. The characteristics of these species are that its upper shell or its carapace is dark grey-brown in colour while its plastron -- or the underside of the shell -- is yellow-grey with black patches, which are sometimes extensive. The skin of the neck and limbs is grey or black. The species is currently listed as vulnerable on the International Union for the Conservation of Nature’s (IUCN) Red List. This means the species is likely to become endangered unless the circumstances threatening its survival and reproduction improve.

This species is found on the granitic Islands of Mahé, Praslin, La Digue, Cerf, and possibly other islands in the Seychelles archipelago. The carapace of the yellow bellied mud terrapin is often yellow-brown in species, although younger species may be olive or dark brown in colour. The plastron is yellow, sometimes with dark suture lines but always lacking extensive symmetrical patches of black. The skin of the neck and limbs are yellowish in colour. Four breeding populations remain and the population continues to decline due to marsh drainage and river canalization and is listed by IUCN as critically endangered.

This small species is distinguishable from other Seychelles mud turtles by its black carapace and plastron. It is known from only three specimens collected in the Seychelles on Mahé Island at the end of the 19th century, probably in an inland highland marsh. The species is currently classified by the IUCN Red List as extinct, though one or a few specimens could conceivably still persist. Their distribution was restricted to Mahé Island, with sightings reported on Ste Anne and Silhouette.