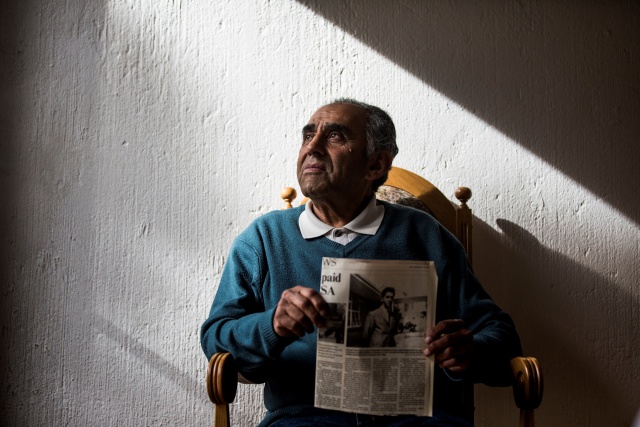 (AFP) - Police brutality, "fake news" propaganda and official cover-ups at the height of apartheid have been laid bare in a South African court probing the death of a communist activist 46 years ago.

Ahmed Timol, a 29-year-old anti-apartheid volunteer, was arrested in Johannesburg in October 1971 and after five days in detention he died after plummeting from the city's police headquarters.

Officers at the time said he took his own life -- a verdict endorsed by an inquest -- but his family fought the ruling and campaigned hard to secure a review that finally began on June 26.

A former officer in the feared security branch which held Timol and was involved in sabotaging anti-apartheid groups, has spoken out about his squad's brutal techniques in court.

"(I saw) a man's testicles being crushed like pepper," said Paul Erasmus, now 61, who joined the unit after Timol's death.

"Electric shocks were used very widely... as all the detectives had little shock machines (adapted) from the old telephone system."

Officers referred to the boxes as "Radio Moscow" because of the leftist leanings of many of the detainees, he said.

Pathologist Shakeera Holland told the hearing in Pretoria that Timol's body, including his face, was covered in bruises and scratches.

"Most of the bruises... were not consistent with a fall from a height," said Holland. "(He) sustained physical assault while in police custody."

Erasmus told AFP he had personally beaten several detainees during his career.

Significantly for Timol's family, who are convinced he was pushed from the 10th floor window, Erasmus revealed that a brigadier known as "the sweeper" was responsible for covering up police crimes.

"They'd sweep up the bits and sort it out," said Erasmus, who kept diaries of his 17 year-long service and admitted he was attracted to the work by "the James Bond secret agent thing".

Stephanie Kemp, a communist anti-apartheid fighter, told the court that one of the party's pamphlets appeared to have been doctored following Timol's death to apparently endorse suicide in detention as a resistance tactic.

Erasmus also disclosed that the police investigations branch was headed by a man considered by his colleagues so brutal and anti-semitic that he was given the moniker "Little Hitler".

He then told the court how he became an expert at forging struggle icon Desmond Tutu's signature, using it to reply to a wealthy US heiress who had offered him funds, declining the money.

In his role in the police's psychological warfare unit, Erasmus said he also produced propaganda to persuade foreign leaders to cut ties to the banned African National Congress (ANC) party.

"People call it 'fake news' today. Sometimes to stir the pot, sometimes to create false impressions -- but the heart of it was to sow disunity in the liberation movement," he said.

His evidence has included some of the most significant disclosures about the apartheid system since the Truth and Reconciliation Commission (TRC), which concluded in 1998.

Erasmus, granted partial amnesty at the TRC, also revealed that he was involved in efforts to make another activist who died in police custody appear to have been suicidal.

"We were told that Neil Aggett hung himself and told to prove he was suicidal from the day he was born," Erasmus said.

A subsequent inquest found that the white anti-apartheid activist died by hanging and that police were not to blame. But human rights lawyer George Bizos argued at the time that his suicide was induced.

Marjorie Jobson of the Khulumani apartheid victim support group described the claim as a major development for the family of Aggett who died in 1982.

The revelation visibly affected Jobson, who was in court, prompting her to describe the review as a "second wave of testimonies".

Bizos, also present for the review, said that criminal charges could still be brought against those implicated in the Timol case.

"The people whose loved ones were killed by the regime want to come to terms with themselves," he said. "They want an acknowledgement that their lives counted."

Bizos, one of Nelson Mandela's closest personal confidants, said that the review could have far-reaching consequences.

"Truth has a way of floating to the top. We are pleased to also reinforce this for people who were in favour of apartheid -- and we encourage them to come forward," he said.

Bizos said that he expected more case reviews, adding "history is on our side."

The court plans to hear evidence next week from policemen present at the scene of Timol's death.