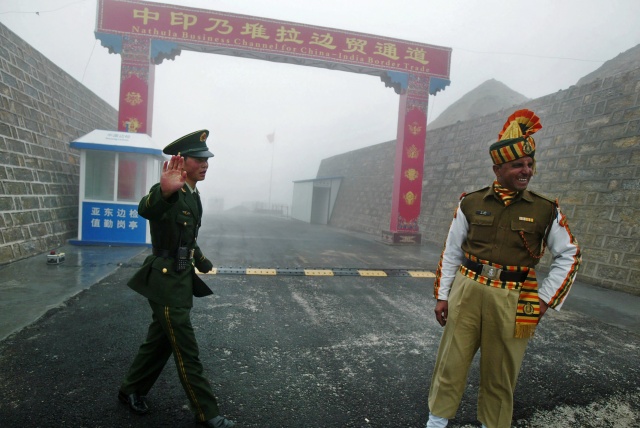 FILES) This file photo taken on July 10, 2008 shows a Chinese soldier (L) next to an Indian soldier at the Nathu La border crossing between India and China in India's northeastern Sikkim state. A border standoff between Chinese and Indian troops on a remote Himalayan plateau has heightened long-standing tensions while ensnaring a tiny kingdom, Bhutan, between the two nuclear-armed powers. The row has festered for more than a month by the end of July 2017 as India and China refuse to back down in the distant but strategically key territory, reflecting the historic mistrust between the Asian giants. (DIPTENDU DUTTA / AFP)

(AFP) - A border standoff between Chinese and Indian troops on a remote Himalayan plateau has heightened long-standing tensions while ensnaring a tiny kingdom, Bhutan, between the two nuclear-armed powers.

The row has festered for more than a month as India and China refuse to back down in the distant but strategically key territory, reflecting the historic mistrust between the Asian giants.

The area is disputed between China and Bhutan but India's decision to jump into the fray reflects its concerns about Beijing's growing military might and ambitions in the region, analysts say.

The border trouble began in mid-June when Chinese soldiers started to extend a road through the Doklam territory -- known as "Donglang" in Chinese.

India, a close ally of Bhutan, then deployed troops to stop the construction project, prompting Beijing to accuse India of trespassing on Chinese soil.

China, which warned this week that it would step up its deployment, insists that India must withdraw its troops before any proper negotiation takes place. India says said both sides should withdraw their forces.

"The solution to this issue is simple, which is that the Indian troops back out honestly," Chinese Foreign Minister Wang Yi said this week.

While the deadlock may be broached during Indian National Security Advisor Ajit Doval's visit to Beijing on Thursday, there are no signs that either side is ready to back down.

"It's easier to shake a mountain than to shake the People's Liberation Army (PLA)," Chinese Defence Ministry spokesman Wu Qian boasted at a press conference Monday.

Sarath Chand, India's vice army chief, said on Tuesday: "China is expanding its influence across the Himalayas into our neighbourhood despite being an economy five times the size (of India), with such a large standing army... it is bound to be a threat for us in the years ahead."

Mistrust is hundreds of years old and the pair fought a brief war in 1962 in India's border state of Arunachal Pradesh.

"India views China's road-building as a threat because (the Chinese) have gone against the status quo of behaviour in a disputed territory," Shen Dingli, vice dean of Fudan University's Institute of International Studies, told AFP.

The road was being built close to the "Chicken's Neck," a narrow, essential strip of land connecting India's northeastern provinces with the rest of the country.

But Beijing maintains that "Doklam has been part of China since ancient times," countering that Indian troops triggered the standoff by crossing a boundary established in an 1890 agreement with Britain.

Zhao Xiaozhuo, a senior Chinese colonel and an analyst at a PLA think tank, said it was "ridiculous" for India to view the road construction as a threat.

"India views infrastructure in the border areas as only for military use with little consideration for their valuable role in economic development," Zhao wrote in the state-run China Daily.

Bhutan has taken a backseat as India and China scuffle.

Jayadeva Ranade, head of the Delhi-based Centre for China Analysis and Strategy, said China is trying to establish a "pro-Beijing lobby" inside Bhutan.

"But Bhutan has limitations on what it can do directly. It has protested to China, issued notes, but more than that, what can they really do but sit and watch?"

Neither Chinese President Xi Jinping nor Indian Prime Minister Narendra Modi can back down without facing a "nationalist backlash" back home, said Huang Jing, a Sino-Indian relations expert at the National University of Singapore.

Xi in particular must exude strength as he consolidates power before a crucial Communist Party congress later this year.

"This situation is very dangerous. I don't think China has much choice if the Indian troops stay where they are -- Xi will have to demonstrate to Chinese people whether he means what he says," Huang told AFP.

India fears that China's "String of Pearls" military and commercial network in the Indian Ocean increasingly undermines its own geopolitical status.

And it has voiced concern about another Chinese project: The China-Pakistan Economic Corridor, which will give Beijing access to the Arabian Sea but passes through the hotly disputed Kashmir region.

The project is part of a massive Chinese global trade infrastructure programme dubbed One Belt, One Road, which India has snubbed.

The standoff is a very public sign of India's willingness to push back.

"As this face-off continues, the one who's actually losing ground are the Chinese because they have styled themselves so far as a major power whom no one can challenge," Ranade said.

"So the fact that India has stood up to them is a message to all other countries in the region."