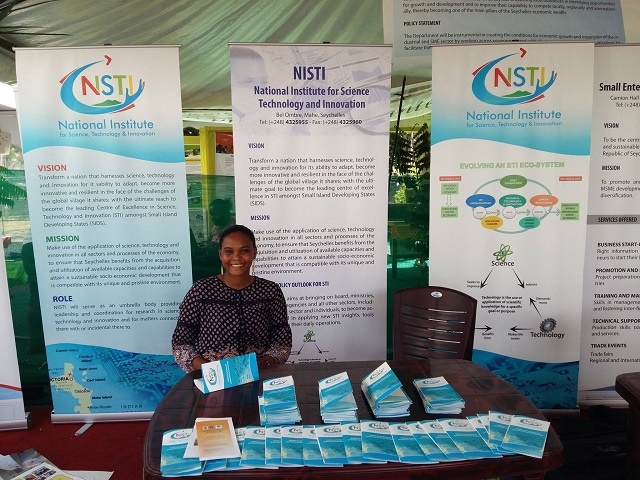 The National Institute for Science, Technology and Innovation (NISTI) in one of the local exhibitions. (NISTI Facebook)

(Seychelles News Agency) - Editor's note: SNA's original story on this topic incorrectly reported that the team from Seychelles had won third place in the overall robotics competition instead of its sponsor organisation winning third place in a specialized category. SNA regrets the error.

The Seychelles National Institute for Science, Technology and Innovation (NISTI) won the bronze medal for outstanding supporting organisation at a global robotics challenge in Washington, D.C, earlier this month.

The Al-Khawarizmi Award from the Iranian Research Organisation for Science and Technology was given to organisations who are promoting Science, Technology, Engineering and Mathematics (STEM) in their countries.

The students were chosen for their knowledge and interest in Science, Technology, Engineering and Mathematics and they had to collaborate with their science teacher, Kevin Dupres, to build and fine-tune their robots for the event.

Team Seychelles, which was the youngest team and came from the smallest country, came 105th out of 163 countries overall in the FIRST Global Challenge held from 16 to 18 July in Washington. Seychelles was ranked 25th out of 40 countries from Africa.

Speaking to SNA, Stana Mousbe, who expressed her love for science, said that it was a fruitful experience filled with scientific knowledge.

“Although I was not part of building the robot, I was there to give moral support and share my knowledge in IT (Information Technology). I helped the team with block programming,” Mousbe said.

She added that “There was a lot of robotic technology on display that was presented by the different teams but ours was distinct and we had only one month to prepare."

“For the competition, we already had our raw material to build the robot, and the judges at the end were so impressed with our presentation, which reflects a new way to deal with water shortages in Africa,” Mousbe said.

Before their departure, a robot kit was handed over to the students from Seychelles, an archipelago in the western Indian Ocean, by the International First Committee Association through the local National Institute for Science, Technology and Innovation.

The competition made global headlines after an all-girls team from Afghanistan was initially denied a visa to the U.S. to travel to the competition. A global uproar helped ensure that the girls were eventually given visas.

The chief executive of the National Institute for Science, Technology and Innovation Institute, Xavier Estico, told SNA that, “the institute is working in close collaboration with schools to build student interest in science.”

Estico said the island nation has students with great potential, which can help shape and build the future technology that could help in agriculture, fisheries and other sectors.

“For this to happen we need to build the right condition to put more emphasis on Mathematics, Technology and Science at school,” said the chief executive.

Frazer Nalletamby, another participant, said that as a small island nation dealing with climate change and long periods of drought, the team wanted to build a robot that reflects a solution to that.

“We will continue to build our knowledge and research to participate in the next competition to show the world that we can make a difference,” Nalletamby added.

As part of their short-term plan, the institute is already aiming for science, technology and innovation club in each school around the island nation.

6 Seychellois students to participate in robotics challenge in US capital