Maduro presses on with Venezuela vote despite protests, condemnation 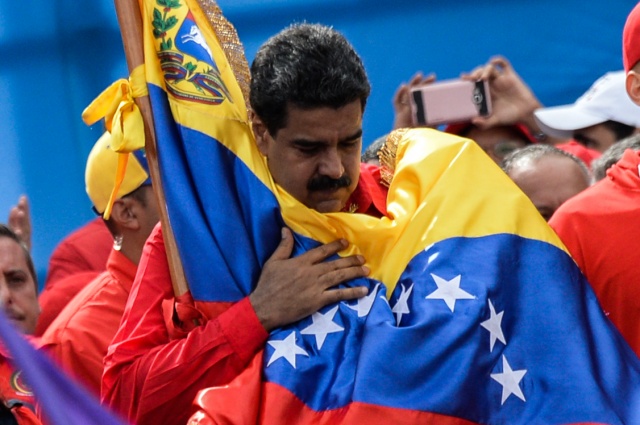 Venezuelan President Nicolas Maduro holds a national flag during the closing of the campaign to elect a Constituent Assembly that would rewrite the constitution, in Caracas on July 27, 2017 on the second day of a 48-hour general strike called by the opposition. Venezuela's opposition called for a nationwide protest on Friday in outright defiance of a new government ban on demonstrations ahead of a controversial weekend election. "The regime declared we can't demonstrate... We will respond with the TAKING OF VENEZUELA tomorrow," the opposition coalition, the Democratic Unity Roundtable, said Thursday on its Twitter account. (Federico PARRA / AFP)

On Friday, his forces faced small groups of protesters defying a ban he had imposed on demonstrations against the election he has called Sunday to choose a new body to rewrite the constitution.

Blockades went up across a few roads in Caracas and in a border town with Colombia, San Cristobal as well as in Maracaibo and Guayana, but the scale was far less than the mass protests seen earlier this week before the ban took effect.

"It's normal that there's fear, but people are still coming out into the streets despite it all," a lawmaker in the opposition-controlled National Assembly, Freddy Guevara, said at one of the Caracas protests.

Maduro on Thursday warned that anyone taking part in protests against his "Constituent Assembly" risked up to 10 years in prison.

The threat appeared to dampen public anti-government demonstrations of the sort that, in the past four months, have led to 113 deaths -- eight of them during a two-day general strike that ended Thursday.

The most recent reported fatality occurred Friday when an 18-year old protester was killed in San Cristobal.

Human rights organizers said another activist, a 23-year-old violinist famous for playing at anti-government protests, had been arrested in Caracas. An opposition mayor, Alfredo Ramos, was also arrested for not lifting barricades under a court order.

US Vice President Mike Pence spoke by telephone to a detained prominent Venezuelan opposition leader, Leopoldo Lopez, who early this month was moved from prison to house arrest.

In implicit support for the opposition, Pence praised Lopez's "courage."

He also called for the "unconditional release of all political prisoners in Venezuela, free and fair elections, restoration of the National Assembly, and respect for human rights in Venezuela," a statement from his office said.

The United States this week imposed sanctions on 13 current and former Venezuelan officials, including police and army chiefs, over Maduro's plan.

Colombia's President, Juan Manuel Santos, said his country would not recognize the results of Sunday's election in Venezuela, calling the basis of the Constituent Assembly "spurious."

Yet Maduro has remained determined to see through his plan, with backing from a loyal military.

"We have a card to play: a card that will win this game. And that card is the National Constituent Assembly," he said.

He urged the opposition to stop its "insurrection" and hold talks instead. The leftist president has repeatedly accused the US of fomenting the unrest against him.

The new assembly would comprise 545 citizens chosen from across the country, and from societal sectors over which Maduro's government holds influence.

The opposition, which brands the election of the body a ploy by an unpopular "dictator" to cling to power, has called for a boycott of the vote.

Some 70 percent of Venezuelans oppose plans for the constituent assembly, and 80 percent reject Maduro's leadership, according to the polling firm Datanalisis.

An electoral expert, Eugenio Martinez, noted that most of Venezuela's 20 million voters would be able to vote twice, raising questions about the validity of final turnout and balloting figures, especially with no foreign election observers present.

Fears of open civil conflict have prompted thousands of Venezuelans to join an exodus into Colombia.

The neighboring country said it would give 150,000 Venezuelans who had overstayed permission to remain another three months before they had to leave.

On Thursday, the United States ordered families of its embassy staff in Venezuela to leave. The US and Canada also warned against their citizens making non-essential travel to the country.

The United Nations human rights office said it was "deeply concerned" about the "very tense and very difficult situation" in Venezuela.

Air France on Saturday announced it was suspending flights to Venezuela ahead of the weekend vote. The carrier said it was monitoring the situation.

Some in Maduro's administration have broken ranks, most prominently his attorney general. Some diplomats resigned this week, including one at the United Nations and another at the embassy in Panama.