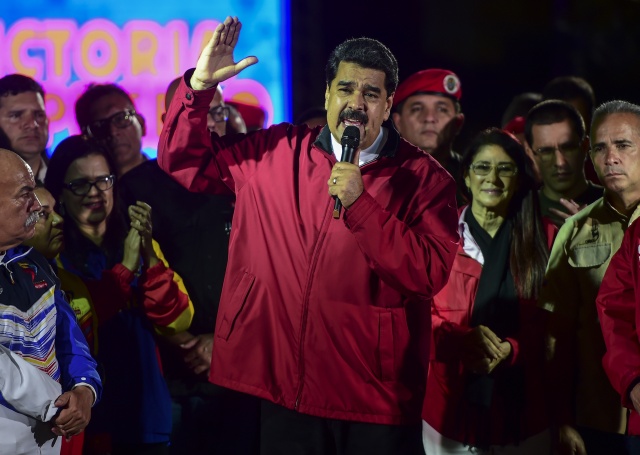 Venezuelan president Nicolas Maduro celebrates the results of "Constituent Assembly", in Caracas, on July 31, 2017. Deadly violence erupted around the controversial vote, with a candidate to the all-powerful body being elected shot dead and troops firing weapons to clear protesters in Caracas and elsewhere. (RONALDO SCHEMIDT / AFP)

(AFP) - Venezuelan President Nicolas Maduro claimed victory Monday in an internationally criticized election for an assembly to rewrite the constitution, but the opposition cried fraud and vowed to keep protesting despite a deadly crackdown.

Ten people were killed in a wave of bloodshed that swept Venezuela Sunday as Maduro defied an opposition boycott and international condemnation -- including the threat of new US sanctions -- to hold elections for a powerful new "Constituent Assembly."

Protesters attacked polling stations and barricaded streets around the country, drawing a bloody response from security forces, who opened fire with live ammunition in some cases.

Despite the boycott and the unrest, the head of the National Electoral Council, Tibisay Lucena -- one of 13 Maduro allies already slapped with sanctions by US President Donald Trump's administration -- said there had been "extraordinary turnout" of more than eight million voters, 41.5 percent of the electorate.

Dressed in bright red, his fist clenched and face beaming, Maduro hailed it as a win in a speech to hundreds of cheering supporters in central Caracas.

"It is the biggest vote the revolution has ever scored in its 18-year history," he said, referring to the year his late mentor, Hugo Chavez, came to power.

"What the hell do we care what Trump says?"

Members of the new assembly will include his wife Cilia Flores, his pugnacious right-hand man Diosdado Cabello, and other staunch allies.

The socialist president is gambling his four-year rule on the 545-member assembly, which will be empowered to dissolve the opposition-controlled congress and rewrite the constitution.

In his speech, he encouraged the assembly to scrap opposition lawmakers' immunity from prosecution as one of its first acts.

There was blistering international condemnation of the vote, led by Washington.

The election was also condemned by the European Union, Canada and Latin American powers including Argentina, Brazil, Colombia and Mexico.

Senior opposition leader Henrique Capriles called on Venezuelans to continue defying the deeply unpopular Maduro with new protests against the election and the "massacre" he said accompanied it.

"We do not recognize this fraudulent process," he said, calling for nationwide marches Monday and a mass protest in Caracas Wednesday, the day the new assembly is due to be installed.

Maduro has banned protests over the vote, threatening prison terms of up to 10 years.

Prosecutors said 10 people were killed in violence around the vote, bringing the death toll in four months of protests to more than 120 people.

Those killed included a candidate for the new assembly, a regional opposition leader, two teenage protesters and a soldier in the western state of Tachira, which saw some of the worst violence.

In eastern Caracas, seven police were wounded when an improvised explosive targeted their motorcycle convoy.

According to polling firm Datanalisis, more than 70 percent of Venezuelans oppose the idea of the new assembly -- and 80 percent reject Maduro, whose term is meant to end in 2019.

"The people are not going to give up the streets until this awful government goes," protester Carlos Zambrano, 54, told AFP in western Caracas.

The number of Venezuelans living abroad has soared as the once-booming oil producer has descended into a devastating economic crisis marked by shortages, runaway inflation, riots and looting.

The US envoy to the United Nations, Nikki Haley, condemned the vote as a "sham" -- a word also used by Britain's junior foreign minister, Alan Duncan, and many experts.

"The vote means the end of any trace of democratic rule. Maduro's blatant power grab removes any ambiguity about whether Venezuela is a democracy," said Michael Shifter, head of the Inter-American Dialogue research center.

"It will accelerate the longer-term trend towards economic, social and political collapse unless those in a position to change course do so, and begin to negotiate a restoration of democracy and economic viability," he said.