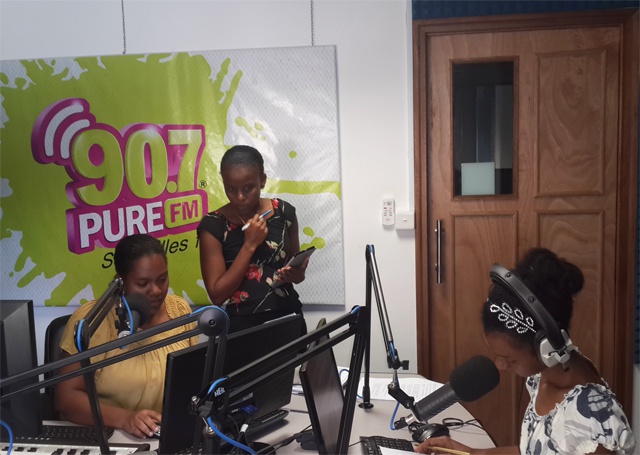 Journalists at Pure FM Radio station getting ready for a news broadcast. It is the Seychelles first private radio station, increasing the choice for listeners in the islandss (Seychelles News Agency)

(Seychelles News Agency) - Reporters without Borders (RWB), an international media watchdog organization has had the opportunity to assess the media landscape in Seychelles following a two-day working visit of RWB’s director for the Africa desk, to the Indian Ocean archipelago.

Her visit ended with a press conference, where, amongst other matters Sriber explained the low rating Seychelles has scored on the RWB World Press Freedom Index for the past year.

Seychelles ranked 103rd out of 180 countries way below other African nations such as Ivory Coast, Republic of Congo and Mozambique and even neighbouring Indian Ocean sister islands of Mauritius and Madagascar amongst others.

Journalists present queried as to the methodology utilized to come up with the index and how the information gathered was validated before a rank is decided for each country under scrutiny.

Sriber explained that RWB had distributed questionnaires to the different media houses and among other relevant partners in Seychelles and the final ranking was arrived at after careful sifting through the way the respondents scored on the country on the different aspects covered in the questionnaire.

“We sifted through all the answers and noted and discarded those who obviously gave only high scores and on the other hand those who down scored the country on everything. We looked for a balance in the scoring and took into account what the journalists felt are affecting them in their working environment,” said Sriber.

Responding to why Seychelles ranked lower than even some countries where journalists have been met with violence in delivering their duties, she explained that while some countries may not have violence against reporters, this does not mean everything is rosy. In that light RWB is re-looking at the quota given to the violence aspect when rating a country. Currently this aspect carries 20% of the overall rating.

Describing the results of her visit here, Sriber said “the media in Seychelles is polarized and reporting is, or borders on partisan.”  She also echoed a finding of Pauline Ferrari, a media consultant who in her Seychelles country report submitted to the Seychelles Ministry of Foreign Affairs in March highlighted the need for training for practicing media personnel.

The Africa Desk Director also took up issues viewed as affecting freedom of expression in Seychelles, including the Public Order Act where she claimed to have learnt that the president of the country is willing to look at those aspects with an eye towards possible revision if necessary.

She also encouraged the creation of an organization for local media practitioners which she said would give them a voice and add value to their work. RWB she said “is willing to assist in providing examples of best practices of such associations and how to get started.” Sriber also opined that a representative of active media practitioners should form part of the Board of Directors of the Seychelles Media Commission and has asked for a revision and updating of the legal framework in which the media operates here.

Seychelles, which has a population of 90,000, has two daily newspapers, 1 tri-weekly and 3 weeklies, 3 radio stations including the island’s first privately-owned radio station, 1 national television station and a recently launched news agency.