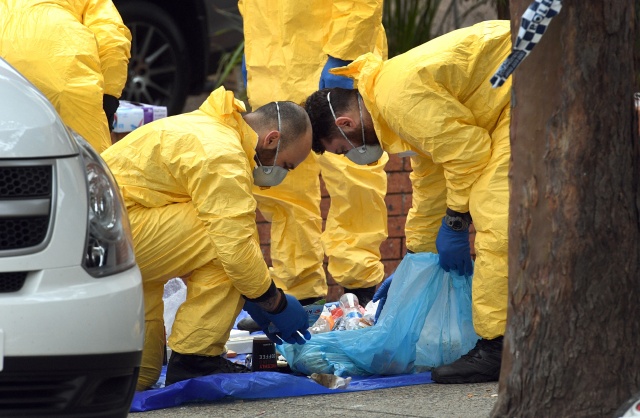 Police search for evidence at a block of flats in the Sydney suburb of Lakemba on July 31, 2017, after counter-terrorism raids across the city on the weekend. Four men accused of plotting to bring down a plane planned to use poisonous gas or a crude bomb disguised as a meat mincer, reports said, with Australian officials calling preparations "advanced". The men -- reportedly two Lebanese-Australian fathers and their sons -- were arrested in raids across Sydney on Saturday evening. (WILLIAM WEST / AFP)

(AFP) - Etihad Airways said Tuesday it was helping Australian police with their investigation into an alleged plot to bring down a plane, as authorities sifted through evidence from counter-terrorism raids.

Four men were arrested in Sydney on Saturday evening, with security tightened across all major Australian domestic and international airports as investigators search several homes across the city.

Local media on Monday reported that the men, who have not yet been charged, planned to use poisonous gas or a crude bomb disguised as a meat mincer, although details of the alleged plot have not been confirmed by police.

"The Etihad Airways aviation security team is assisting the Australian Federal Police with its investigation and the matter is ongoing," the Abu Dhabi-based carrier said in a statement.

"Etihad is complying fully with the enhanced security measures at airports in Australia and monitoring the situation closely. Safety is the airline's number one priority."

Its statement came as Sydney's Daily Telegraph reported that an Etihad flight to Abu Dhabi, which could have carried up to 500 people, was the target.

Unidentified officials told the Australian Broadcasting Corporation the suspects -- reportedly Lebanese-Australian -- might have links to the Islamic State (IS) group in Syria.

Justice Minister Michael Keenan told the national broadcaster he would not comment on the IS links, but stressed the significance of the attack if it had taken place.

"What is very clear is that, if these allegations were to have gone ahead, it would have been just an enormously dreadful thing to have happened to our country," he said late Monday.

"It's clear that this has been inspired by radical Islamic ideology.

"We're obviously looking at the links that they have to the organisation within the Middle East, but there's nothing further that I can say about that at this stage," he added.

Australia's national terror alert level was raised in September 2014 amid concerns over attacks by individuals inspired by organisations such as IS.

A total of 12 attacks, before the latest one, have been prevented in the past few years and 70 people have been charged.

Several terror attacks have taken place in Australia in recent years, including a Sydney cafe siege in 2014 which saw two hostages killed.