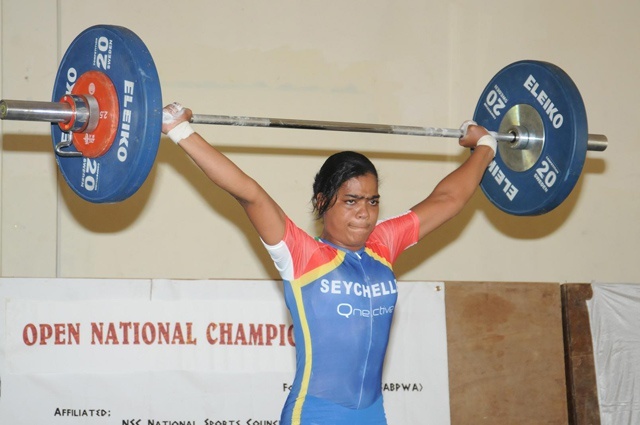 (Seychelles News Agency) - To accumulate enough points to qualify for next year’s Commonwealth Games, the holder of the African Senior Weightlifting Championship title has to train intensely and compete in competitions.

That's what Clementina Agricole, a well-known sportsperson in Seychelles, a 115-island archipelago in the western Indian Ocean, told President Danny Faure at State House, Victoria, during a visit on Tuesday.

“The president has given his promise that he will help me financially for the competitions that I have to take part in to qualify for the Commonwealth Games,” said Agricole.

The 29-year-old added that she was honoured to have been called upon by the president, as not many athletes get such chances, and she feels that she is doing it on the behalf of all weightlifters.

“Today I received recognition for making Seychelles proud. Since I sometimes get to represent the country, I think I am an ambassador and this makes me proud and happy,” said Agricole.

Agricole, the holder of Seychelles’ ‘Sportswoman of the Year’ title twice in 2013 and 2014, lifted 86kg in snatch and 107kg in clean & jerk for an Olympic total of 193kg. She took first place in front of two Tunisians.

“When I started the competition and understood the intensity of it, I placed my worries aside, focused more and reminded myself of my aims. I made sure that I passed all my trials,” said Agricole, adding that her experience helps her greatly.

The African title holder didn’t want to let down her supporters and at the same time, she wanted to prove wrong those who thought she wouldn’t come home with gold medals.

During her participation in Yaounde, Cameroon last year, the young woman claimed three bronze medals after lifting 77kg in snatch and 101kg in clean & jerk for a total lift of 178kg in the 58kg category.

Agricole, a triple-gold medallist at the 9th Indian Ocean Island Games in August 2015,  and a winner of silver and two bronze medals at the All-Africa Games in September 2015, had been training in the United States since 2015 under an Olympic solidarity sponsorship.