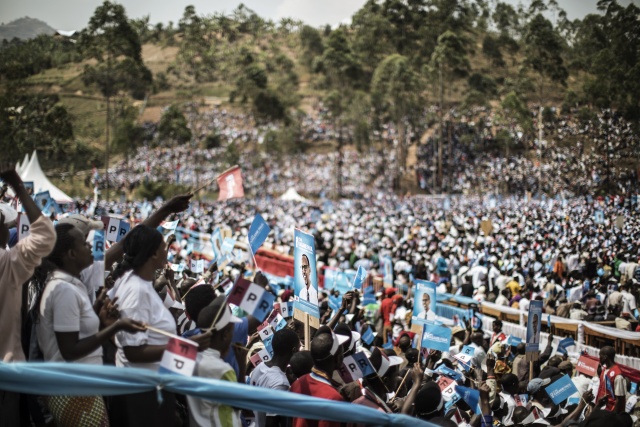 Supporters of the incumbent Rwandan President Paul Kagame gather for a rally in Gakenke, on July 31, 2017, ahead of Rwanda’s presidential elections. (MARCO LONGARI / AFP)

(AFP) - Rwandans go the polls Friday in a presidential election in which strongman Paul Kagame is widely expected to cruise to a third term in office.

The 59-year-old leader faces two little-known candidates who were given only three weeks to campaign against the incumbent, who has kept a tight hold on power since his rebel army ended the 1994 genocide.

Even Kagame has said the result is a foregone conclusion.

While the nation has been colourfully covered with the red, white and blue of the ruling Rwandan Patriotic Front (RPF) and posters of Kagame, there has been barely a trace of the opposition.

"They told us we cannot put our banners or flags where the RPF's things are, but unfortunately the RPF put theirs almost everywhere," Habineza told AFP during a recent rally in the south of the country.

He was standing in front of a small stage, surrounded by about 100 people, including many children drawn by the booming music.

"I came out of curiosity, but he has no chance. Kagame has delivered everything he promised, there is no one but him," said Sabin Nkundukozera, 66.

"It is the first time I have heard of this man, I couldn't even tell you his name," he said of Habineza.

In contrast, thousands flock to Kagame's rallies, where the president has repeated that "the election is over".

His confidence comes after 98 percent of Rwandans approved a constitutional amendment in a 2015 referendum that granted him the right to run for a third term in office.

Observers condemned the reform, which could potentially see Kagame retain office twice more if re-elected this time and allow him to stay president until 2034.

He served first as vice-president and defence minister, although he was widely considered the de facto leader of the country and was appointed as president by lawmakers in 2000.

He is credited with a remarkable turnaround in the shattered nation, bringing order, stability, infrastructure and annual economic growth of about seven percent.

However rights groups accuse him of ruling through fear, relying on a systematic repression of the opposition, free speech and the media.

Critics have been assassinated, jailed or forced into exile, and some observers believe the only reason Habineza and Mpayimana have been allowed to run is that they pose no threat.

"There is no election in Rwanda, there is a coronation declaring Kagame the king," said outspoken local journalist Robert Mugabe.

"The real opposition, the people with the real voices, cannot be around," he said.

However political analyst Christopher Kayumba said Kagame remains popular, with Rwandans seeing him as a guarantor of stability after his military victory brought an end to the genocide.

"There is no way you can compare the stature of President Kagame, the resources of the RPF, with the Green Party. The opposition will be beaten hands down. There is no question about that."

There are 6.9 million registered voters across the tiny east African nation, known as the Land of a Thousand Hills. Polling stations open at 0500 GMT and close at 1300 GMT.

Africa » Be a reporter: Write and send your article » Subscribe for news alert
Tags: Rwanda, Vote