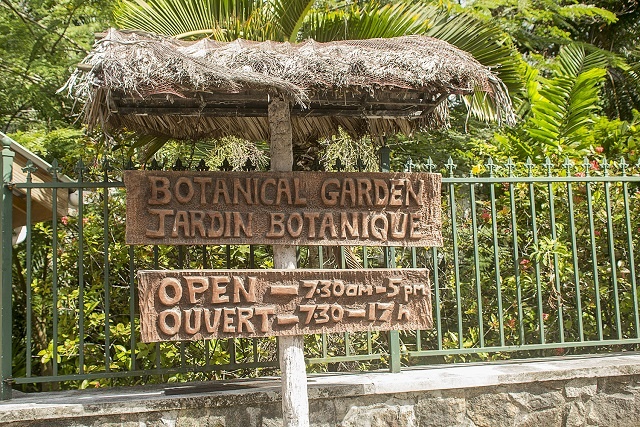 (Seychelles News Agency) - One of the must see places in Seychelles for people with a love of nature is the Botanical Garden. Managed by the National Botanical Gardens Foundation since December 2009, it is located at Mont Fleuri, on the outskirts of Victoria, the capital.

Established in 1901 by a Mauritian agronomist, Rivalz Dupont, the 15-acre garden is one of the Seychelles’ oldest national monuments and is a living green heritage providing a quiet, green getaway with a 20-minutes walk from the busy town centre. The garden has developed into one of Victoria’s main tourist attractions. The garden opens at 7.30 a.m and closes at 5 p.m.

The first thing to greet you as you enter the gardens is the sight of the biggest nut in the world --  the coco de mer. The most iconic of Seychelles' endemic plants, the Lodoicea Maldivica grows in its natural state in Vallee-de-Mai on Praslin, the island nation second-most populated island. In 1956 Duke of Edinburg planted the most fruitful Coco de mer palm in the Botanical Gardens.

Among the endemic birds found in the garden are the fruit eating Blue Pigeon, locally known as the pizon olande, the nectar-sipping Sunbird or kolibri, and the Seychelles Bulbul or merl.  Some introduced species have also found their home in the garden like the colourful introduced Madagascar Fody or Sren, the Indian Myna Bird or marten, the Malagasy Turtle Dove or tourtrel de zil and the Barred Ground Dove or tourtrel koko.

One of the most eye-catching exotic plants found in the gardens is the Cannonball tree, so named because of not only are the fruits as large, round and heavy as their namesakes but when falling to the ground, they often do so with loud and explosive noises. The cannon ball tree is believed to be native to South America, India and the Caribbean islands. This is an unusual tree which bears flowers and fruits along the trunk.The fruit emits an unpleasant odour and can be used as an insect repellent just by rubbing it to the skin or clothes.

An added attraction to the gardens is the population of giant tortoises originally from the world heritage site of Aldabra. They are one of the top attractions at the botanical garden as one can get up close to one of the creatures that grow to a very old age. The tortoises are in an enclosure dedicated to these oldest inhabitants of Seychelles. These majestic creatures can live up to over 100 years and populated our islands well before the first settlers arrived.

The garden also showcases a collection of terrapins locally known as torti soupap. These dull-coloured turtles are believed to have been introduced from the African continent and Madagascar. Take your time at their pond to see them emerge from beneath their shell as these small creatures are known to camouflage themselves. They can be difficult to be distinguished from other features in the pond especially the stones.

The garden is also home to a variety of local and exotic flowers such as the heliconia, the rose of Venezuela, the Pride of Barbados, Ylang-Ylang, Frangipani,  different colours of hibiscus as well as a collection of exotic and endemic orchids in attractive colours.