Thousands of guns handed over in Australia amnesty 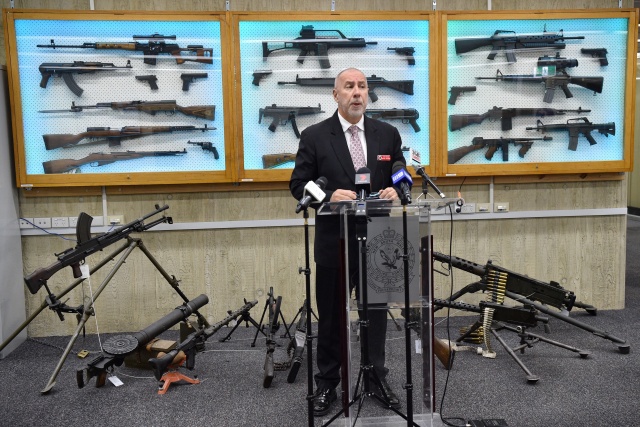 Detective Chief Inspector Wayne Hoffman of the New South Wales Police speaks to the media at a press conference at their headquarters in Sydney on on August 8, 2017, as guns previously seized from criminals are seen behind him. More than 6,000 guns have been surrendered in Australia's most populous state in just one month, police said on August 8, after fears of terrorism and an influx of illegal firearms sparked a national amnesty. (Peter PARKS / AFP)

(AFP) - More than 6,000 guns have been surrendered in Australia's most populous state in just one month, police said Tuesday, after fears of terrorism and an influx of illegal firearms sparked a national amnesty.

The government said in June it believed there were as many as 260,000 illicit weapons on the streets, and with the threat of extremist attacks and a spate of gangland shootings, it wanted to minimise the danger.

In total, some 1,700 rifles, 460 shotguns and nearly 200 handguns were surrendered to police and dealers, while thousands of others were handed in for registration.

No official figures have been announced yet for other states and territories.

The amnesty runs from July 1 until September 30, allowing people to hand in unregistered or unwanted firearms with no questions asked. Outside that period people face fines of up to Aus$280,000 (US$222,000) or 14 years' jail.

The national firearms amnesty is the first since the 1996 Port Arthur mass shooting that claimed 35 lives.

More than 600,000 weapons were destroyed in the aftermath of that attack, during a gun buy-back in which compensation was offered.

All guns in Australia must be registered, but many arrive illegally from overseas through organised syndicates.

Australian officials have grown increasingly concerned over the threat of extremist attacks and have prevented 13 on home soil since September 2014.

Several terror attacks have taken place in Australia in recent years, including a Sydney cafe siege in 2014 which saw two hostages killed.