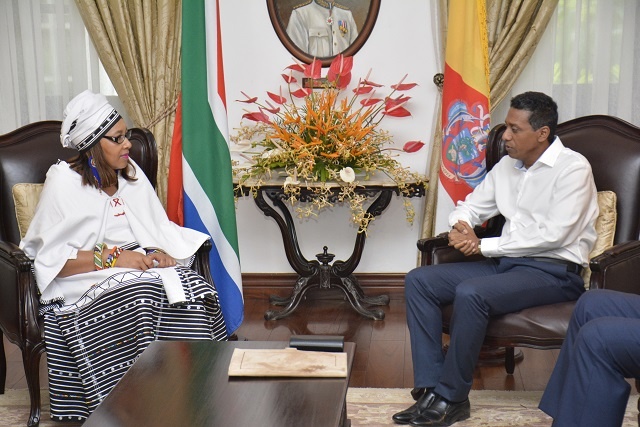 (Seychelles News Agency) - Key areas of cooperation between Seychelles and South Africa were the focal point of discussion between President Danny Faure and the newly accredited South African high commissioner to the island nation.

Tourism, health and education were the existing areas of bilateral relations touched upon by the head of state and the diplomat, after Zenami Dlamimi, the new high commissioner, presented her credentials to Faure at State House, Victoria, on Tuesday.

“In terms of the bilateral cooperation between South Africa and Seychelles, the collaboration is robust and we acknowledge the important role South Africa has played in the last years and continues to play to spearhead many important initiatives in Africa,” said President Faure.

On her part, Dlamimi wishes to see the South Africa-Seychelles bilateral relations continue to strengthen, particularly in the trade sector.

The high commissioner and the president also talked about ways the two countries can further consolidate the existing relationship, primarily in priority sectors such as maritime security, forensics investigations and culture and arts.

Seychelles and South Africa began diplomatic relations in 1993. In March 2016, South Africa opened its consulate in Seychelles at Eden Plaza, Eden Island, a reclaimed island on the east coast of main island Mahe.

Dlamimi will be based in Port Louis, Mauritius.

President of Maldives to visit Seychelles on Friday, talk about tourism, Blue Economy

A greener wardrobe with COCO Seychelles