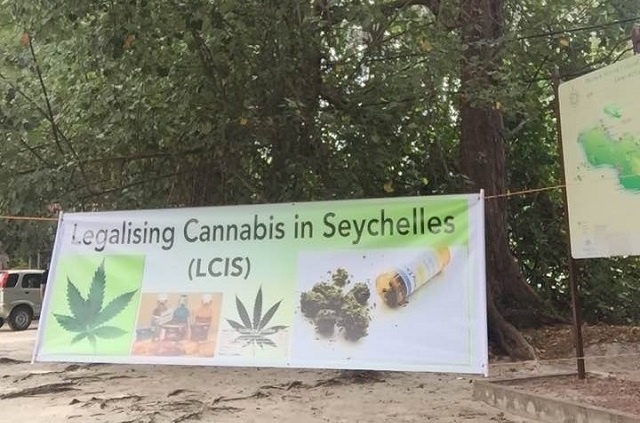 The movement ‘Legalising Cannabis in Seychelles,’ said the petition is asking the government to remove cannabis from the list of class A, B, or C drugs which are controlled drugs. (Ralph Volcere, Facebook)

(Seychelles News Agency) - A group of citizens in Seychelles has launched a petition to lobby for the legalisation of cannabis in the island nation.

Ralph Volcere, who is spearheading the movement ‘Legalizing Cannabis in Seychelles,’ told SNA the purpose of making the substance legal is to control the abuse of heroin in the country.

Volcere who was an independent candidate for the district of Au Cap in the National Assembly elections last September was pushing for the legislation of cannabis for medicinal use and recreational purposes in his campaign message.

The petition is asking the government to remove cannabis from the list of class A, B, or C drugs.  Under the Seychelles Misuse of Drugs Act, class A, B or C are controlled drugs. Under the act, import, export and trafficking of controlled drugs are prohibited and a person shall not possess, smoke, consume or administer such a drug.

A total of 5,000 signatures has been collected for the petition, which will close on Tuesday, August 15, on La Digue, the third-most populated island.

“The term legalization we feel is being misunderstood," Volcere said." Some people are of the view that cannabis will be on the streets -- that will not be the case. In fact, the new legislation will provide for the orderly use of cannabis in authorised places and access to children will still not be permitted.”

Volcere proposes that the age limit be 21 and that it would be illegal to drive under the influence of cannabis.

Volcere told SNA that his own research in Seychelles, a group of 115 islands in the western Indian Ocean, showed that most people who used cannabis before and who are now on heroin did so when there the substance was not available on the market.

“It is clear that a large number of youths are hooked on heroin and if nothing is done apart from lip service it is going to get much worse," he said.

Cannabis is derived from the plant cannabis sativa which grows wild in many tropical areas of the world. It is used in two main forms: marijuana, made from the leaves and flowers of the plant; and hashish, made from a resin found in the plant. The main active ingredient in cannabis is called delta-9 tetrahydro-cannabinol, commonly known as THC. This is the part of the plant that gives the "high."

In Seychelles, cannabis has been used for a long, undocumented period.  Prior to the entry of heroin in the country, the substance was accessible to the public through the black market.

Noella Gonthier, the director of CARE (Campaign for Awareness, Resilience and Education) an organisation leading the fight against substance abuse since 1996, expressed her concern about the petition.

“I believe the petition is for the legalisation of cannabis, which CARE is totally against. CARE is concerned about the misguided information around the subject matter, in particular to children and adolescents,” said Gonthier

She added that CARE is fully cognizant of the medicinal potentials of cannabis but this has to be done under proper control and in the right hands.

Gonthier told SNA that the debate on cannabis has been brought into the living rooms of all families through the media which has led to an increase in the belief that using it is normal.

The director of CARE said that the decision should be based on the research of a reputable medical and scientific community and not of the vested interest of cannabis proponents.

A concerned citizen, Juna Kilindo, said that she is not in favour of legalizing cannabis because of its negative impact on the society.

“We already have a major issue, which is heroin. We need to deal with that first, and then we can talk about legalizing cannabis or not,” said Kilindo.

Meanwhile, a cannabis user, Ian Moses, said that he is all for legalizing cannabis as it can be a solution to control the propagation and usage of heroin.

“Most of the times, youth who has started to use cannabis use heroin because they are deprived of cannabis on the market. This is a strategy used by drug dealers, which leaves no option when there is no cannabis for those young minds to buy heroin to cope with their cannabis addiction,” Moses said.

Moses who had also signed the petition added: “Since I am using cannabis, my health has not been affected nor has it pushed me into using heroin. Cannabis is a plant of nature.”

Pascal Chang Leng, who is a naturopath, told SNA that he is in favour of legalizing cannabis for medical purpose.

“There are many reasons why cannabis should be decriminalized. It is a relatively safe and harmless plant, safer than many other unhealthy and harmful substances that are already legally accessible on the market.”

The naturopath said there is high level, gold-standard scientific evidence to support the use of cannabis for anorexia, nausea and pain.

In contrast, the public health commissioner, Jude Gedeon, told SNA that the department of health position on the issue remains. No legalizing cannabis, unless it’s being used in a controlled manner for medical purpose.

Gedeon said that health wise, cannabis as a smoking product has a negative effect on the mental health of human being.

After the signing of the petition is closed, an original copy will be handed over to President Danny Faure for evaluation and a copy will be given to the Speaker of the National Assembly, Patrick Pillay.

General » Be a reporter: Write and send your article » Subscribe for news alert
Tags: Misuse of Drugs Act, Campaign for Awareness, Resilience and Education, Speaker of the National Assembly