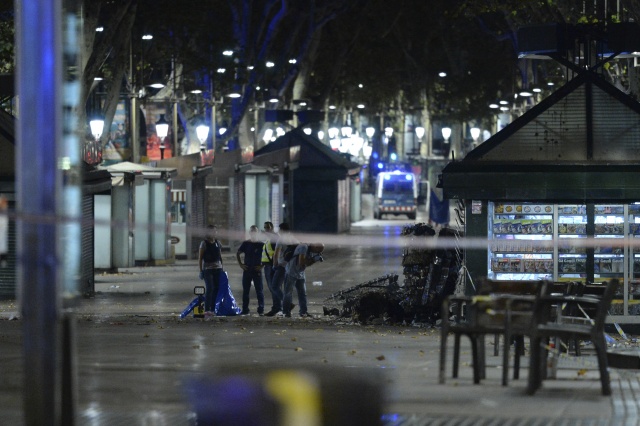 Policemen check the area after towing away the van which ploughed into the crowd, killing at least 13 people and injuring around 100 others on the Rambla in Barcelona, on August 18, 2017. A driver deliberately rammed a van into a crowd on Barcelona's most popular street on August 17, 2017 killing at least 13 people before fleeing to a nearby bar, police said. Officers in Spain's second-largest city said the ramming on Las Ramblas was a "terrorist attack". The driver of a van that mowed into a packed street in Barcelona is still on the run, Spanish police said. (Josep LAGO / AFP)

(AFP) - Drivers have ploughed into pedestrians in two quick-succession, separate attacks in Barcelona and another popular Spanish seaside city, leaving 13 people dead and injuring more than 100 others.

In the first incident, which was claimed by the Islamic State group, a white van sped into a street packed full of tourists in central Barcelona on Thursday afternoon, knocking people out of the way and killing 13 in a scene of chaos and horror.

Some eight hours later in Cambrils, a city 120 kilometres south of Barcelona, an Audi A3 car rammed into pedestrians, injuring six civilians -- one of them critical -- and a police officer, authorities said.

Gunfire ensued during which police killed the five attackers, some of whom were wearing explosive belts.

Police said they were "working on the hypothesis that the terrorists shot dead in Cambrils are linked to what happened in Barcelona".

Witnesses in Barcelona recounted how bodies were strewn along the famous Las Ramblas boulevard where the driver went on a rampage as other people fled for their lives, screaming in panic.

The carnage in a city hugely popular with tourists from around the world is the latest in a wave of attacks in Europe where vehicles have been used as weapons of terror.

As world leaders united in condemning the carnage, the IS propaganda agency Amaq claimed that it was carried out by "soldiers" from the jihadist group.

Police announced the arrest of two suspects, identified as a Spaniard and a Moroccan, but said the driver was still on the run.

"We're united in grief," Spanish Prime Minister Mariano Rajoy said in a televised address after rushing to Barcelona, the biggest city in Catalonia, a region in Spain's northeast whose separatist government is defying Madrid with a drive for independence.

"Above all we're united in the firm intention to defeat those who want to take our values and way of life from us."

There were at least 18 nationalities among the Barcelona victims who came from countries as varied as France, Venezuela, Australia, Ireland, Peru, Algeria and China, according to Spain's civil protection agency.

Belgium said one of its citizens had died in the Las Ramblas assault, while The Hague said three Dutch were injured and a Greek diplomat reported three nationals had been wounded -- a woman and her two children.

Las Ramblas is one of Barcelona's busiest streets, lined with shops and restaurants and normally packed with tourists and street performers until well into the night.

"When it happened I ran out and saw the damage," local shop worker Xavi Perez told AFP.

"There were bodies on the ground with people crowding round them. People were crying. There were lots of foreigners."

Tom Gueller, who lives on a road next to Las Ramblas, said he saw the vehicle speeding along the boulevard.

In Cambrils, meanwhile, Markel Artabe, a 20-year-old restaurant worker, said he was on the seaside promenade when he heard what he initially thought were fireworks, but soon realised were gunshots.

"I saw a foreigner dead with a gunshot in the head. His friends were crying out 'help'. I also saw dead bodies that seemed to be terrorists because they were wearing explosive belts."

Spain, the world's third tourism destination, had until now been spared the kind of extremist violence that has rocked nearby France, Belgium and Germany.

It had even seen a surge in tourists as visitors fled other restive sunshine destinations like Tunisia and Egypt.

But it is no stranger to jihadist attacks, having been hit by what is still Europe's deadliest in March 2004, when bombs exploded on commuter trains in Madrid, killing 191 people in an attack claimed by Al Qaeda-inspired extremists.

Police said Thursday that one of the arrested suspects in the Barcelona attack was a Spaniard born in Melilla, a Spanish territory on Morocco's north coast, and the other a Moroccan named as Driss Oukabir.

The Spaniard was arrested in Alcanar, about 200 kilometres south of Barcelona, the scene of an explosion in a house late Wednesday that left one person dead and seven wounded and is believed to be linked to Thursday's assault.

"We suspect that they (the occupants) were preparing an explosive device," Josep Lluis Trapero of the regional Catalonia police told reporters.

Thursday's attack drew condemnation from across the globe.

US President Donald Trump condemned the "terror attack" and said the United States "will do whatever is necessary to help", adding: "Be tough & strong, we love you!"

France's President Emmanuel Macron -- whose country has witnessed a series of bloody jihadist atrocities including a truck rampage in Nice in July 2016 that killed 86 people -- said his thoughts were with the victims of the "tragic attack".

The Nice carnage and other assaults including the 2015 shootings and bombings on Paris nightspots were claimed by the Islamic State, but it is believed to be the first IS claim of an attack in Spain.

Catalonia has the highest concentration of radicalised Islamists in the country along with Madrid and the Spanish territories of Ceuta and Melilla in northern Morocco.

General » Be a reporter: Write and send your article » Subscribe for news alert
Tags: Spain, attack