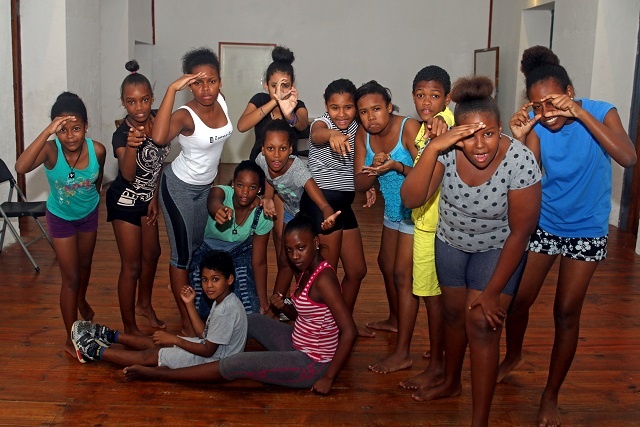 A drama workshop was organised to give new skills to local instructors and young people accredited to the School of Drama. (Joe Laurence, Seychelles News Agency)

(Seychelles News Agency) - Students studying at the School of Drama in Seychelles will be getting international training following the establishment of a partnership program with Britain's University of Winchester.

Stephen Hall, head of performing arts at the university, is visiting the island nation to discuss with the National Conservatoire of Performing Arts about adopting some UK-based qualifications and developing a first-year drama degree for the School of Drama. Students, who complete the first year, can then proceed to the University of Winchester for the second and third year.

As a first step, a two-week drama workshop was held at the Theatres des Palmes at Mont Fleuri, a central district on Mahe, the Seychelles' main island. In the sessions, students got to work with a professional with 20 years of experience as an actor, director, writer, and composer.

The training was also organised to give new skills to local instructors and young people accredited to the school.

“The country has existing strength in music and dance, and the missing link is drama. There is a need for a resurgence of drama and theatre. I think that theatre and drama have the power for revisiting and celebrating the rich history and culture of the Seychelles,” said Hall.

The head of performing arts at the Winchester University said that drama and theatre can also be used as a way of sensitising the communities on critical issues pertinent to them.

“It is not just about a play on the stage, but it is about taking the tools of this art and going out into the community, meeting with different groups, finding their stories and letting their voices be heard,” he said.

“There is a lot of potential from what I have seen here, and people should really think about giving the real value to drama which is very beneficial to young people as it helps them to develop and build up their self-confidence and their communications skills.”

Local Instructor Kurt Lagrenade, who studied at the university, welcomed the partnership with Winchester, saying that “students who are really interested in theatre and drama can now have the opportunity to be trained, enrich their knowledge and earn their degree at the university.”

Lagrenade said that after their foundation studies in drama, the students will learn about production.

“We then expect them to form their groups and start performing. Using theatre for development, they can perform basically anywhere in community centres, on playfields, anywhere in town. They can use their skills to entertain but at the same time educate and raise awareness on issues affecting the Seychelles.”

Arts & Culture » Be a reporter: Write and send your article » Subscribe for news alert
Tags: University of Winchester, National Conservatoire of Performing Arts, School of Drama