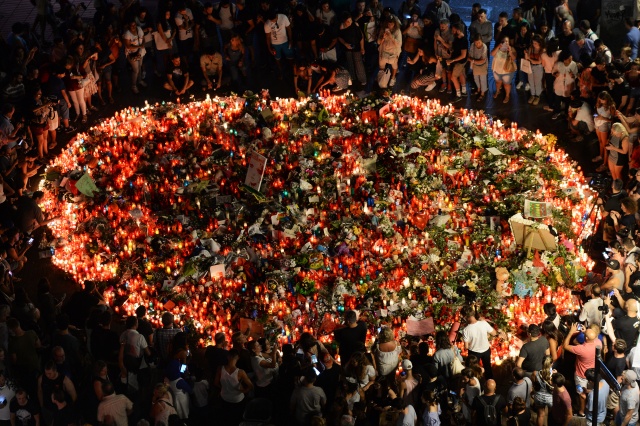 People pay tribute to the victims of the Barcelona attack on Las Ramblas boulevard in Barcelona on August 19, 2017, two days after a van ploughed into the crowd, killing 13 persons and injuring over 100. Drivers have ploughed on August 17, 2017 into pedestrians in two quick-succession, separate attacks in Barcelona and another popular Spanish seaside city, leaving 14 people dead and injuring more than 100 others. (Josep LAGO / AFP)

(AFP) - A grief-stricken Barcelona prepared Sunday to commemorate victims of two devastating terror attacks at a mass in the city's Sagrada Familia church, as police hunted for a Moroccan man believed to be the driver that killed 14 people.

As investigators scrambled to piece together the attacks, Interior Minister Juan Ignacio Zoido said Saturday the cell behind the carnage that also injured 120 and plunged the country into shock had been "dismantled," though local authorities took a more cautious tone.

Police said they had cast a dragnet for 22-year-old Younes Abouyaaqoub, who media reports say was the driver of a van that smashed into people on Barcelona's busy Las Ramblas boulevard on Thursday.

An extensive operation including roadblocks was deployed across Catalonia on Saturday afternoon, police said, urging people not to disclose information about the checkpoints.

Two days after the assaults that struck the busy tourist hub and the nearby seaside town of Cambrils, Spaniards put on a defiant front while mourning the victims, with crowds out in force to greet King Felipe and Queen Letizia as they arrived to pay homage to the victims.

Slogans like "Las Ramblas is crying but alive" were seen on shop windows, while a convoy of taxis with "We're not afraid" plastered on their windows sounded their horns.

"People are coming here like they are seeking comfort from others," said Sergio Lopez, 36, whose family runs a kiosk on the main tourist thoroughfare.

Following the 10:00 am (0800 GMT) mass at Gaudi's Sagrada Familia, nearly 100,000 people were expected at Barcelona's Camp Nou stadium Sunday for their team's first game of the season, to be marked by a minute of silence for the victims.

Hours after the Barcelona carnage, a similar attack struck in the seaside town of Cambrils early Friday. Police shot and killed the five attackers in Cambrils, some of whom were wearing fake explosive belts.

The Islamic State (IS) group claimed responsibility for the attack, believed to be its first in Spain.

The terror cell in Spain reportedly comprised at least 12 young men, some of them teenagers.

Investigators have been homing in on the small town of Ripoll, at the foot of the Pyrenees, where many of the suspects -- including Abouyaaqoub -- lived.

On Saturday, police raided the apartment of an imam, Abdelbaki Es Satty, according to his flatmate who gave his name only as Nourddem.

But Spanish daily El Pais, quoting police sources, said the imam might have been one of those killed in an explosion in a home in Alcanar, about 200 kilometres (120 miles) south of Barcelona, where the alleged jihadists were believed to have been building bombs.

A waiter at a Ripoll cafe told AFP he had served beers to some of the suspects numerous times, most recently just two days ago.

Most of the suspects are children of Moroccan immigrants, including Ripoll-born Moussa Oukabir, 17, one of five suspects shot dead in the Cambrils attack. His older brother, Driss, counts among the four arrested.

Back in Morocco, Moussa and Driss's father Said broke down, surrounded by relatives.

"We're under shock, completely devastated," he told AFP, saying Moussa had been studying "normally" at school while Driss worked "honestly".

Police said they believed the suspects were planning a much larger attack.

"They were preparing one or several attacks in Barcelona, and an explosion in Alcanar stopped this as they no longer had the material they needed to commit attacks of an even bigger scope," said Josep Lluis Trapero of Catalonia's police.

Security forces were seen removing dozens of gas canisters from the house in Alcanar on Friday.

And as the hunt for Abouyaaqoub gathered pace, a white van linked to the attacks was found in Spain, said French authorities, who had earlier been warned by their Spanish colleagues that the vehicle may have crossed into France.

With the peak summer tourism season still in full swing, the Spanish government ordered security ramped up in crowded places, though it kept the terror threat level at four out of a maximum five, Zoido said.

Spain's tourism sector has been vital to its economic recovery, and because it has until now been spared the recent wave of extremist attacks, it has recorded a surge as visitors shunned more restive destinations such as Tunisia and Egypt.

But the country is no stranger to jihadist attacks.

In March 2004 it was hit by what remains Europe's deadliest attack, when bombs on commuter trains in Madrid killed 191 people in an assault claimed by Al Qaeda-inspired extremists.

General » Be a reporter: Write and send your article » Subscribe for news alert
Tags: Spain, attacks