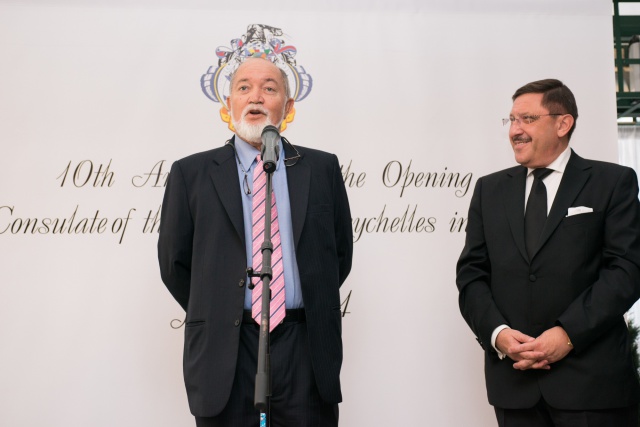 Sir James Mancham speaking at the Seychelles consulate anniversary event. Next to him is the honorary consul for Seychelles to Bulgaria, Maxim Behar (Seychelles Consulate in Bulgaria)

Seychelles’ former president Sir James Mancham travelled to the Bulgarian capital of Sofia at the beginning of June to attend a reception held by Honorary Consul of the Republic of Seychelles in Bulgaria, Maxim Behar, to mark the occasion, according to the Sofia News Agency, Novinite.

“What I have always found attractive about the Seychelles are the people first and foremost, not only the environment. They are smiling, hard-working, dedicated and responsible,” Maxim Behar told the assembled crowd of government representatives, diplomats and businessmen.

Behar was appointed Honorary Consul of the Republic of Seychelles in Bulgaria in July 2004 by Seychelles President James Michel.

Mancham praised Behar’s “constant work” to promote the image of Seychelles abroad, and added that his love for the Indian Ocean republic could not fail to be noticed by the political leadership.

"To me it is an honor to be at this unique party, attended by intelligent and successful people, who came to show their respect to our country and our honorary consul..(...)... It was one of my most successful visits abroad in the past years," Sir Mancham said in his statement.

During his visit to Bulgaria, Mancham also attended a meeting with Bulgarian Foreign Minister Kristian Vigenin and was received by former Bulgarian King and Prime Minister, Simeon Saxe-Coburg-Gotha, in his office residence at the royal palace of Vrana. He also met with former Bulgarian President Petar Stoyanov.

Behar, the owner and manager of a leading PR and Social Media corporation M3 Communications Group, Inc, is the one who initiated and financed the concept and software development for the Seychelles News Agency, which launched on April 22 this year.

Seychelles, a small island state of 90,000 people, has embassies in New York, Paris, London, Brussels, Pretoria, Addis Ababa, New Delhi, Abu Dhabi and Beijing, and appoints honorary consuls and consuls general to countries where it does not have permanent missions.