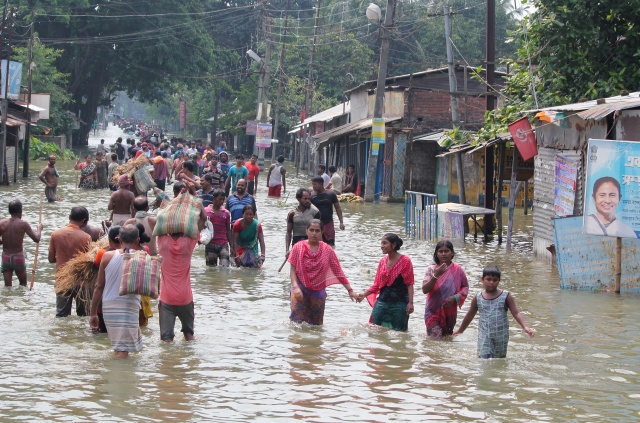 Indian residents wade through flood waters in Balurghat in West Bengal on August 17, 2017. At least 221 people have died and more than 1.5 million have been displaced by monsoon flooding across India, Nepal and Bangladesh, officials said August 15, as rescuers scoured submerged villages for the missing. (STR / AFP)

(AFP) - More than 750 people have died in floods across South Asia, officials said Monday, with monsoon rains also causing the deaths of hundreds of animals, including rhinos and a tiger.

The human toll is steadily rising across India, Nepal and Bangladesh following the latest in a series of deluges since August 10, as the annual monsoon hits the north and east of the region.

Nearly 50 bodies were found overnight in Bihar, in India's east, taking the number of dead there to 253, a state disaster official told AFP.

In Nepal, 143 people have died and 30 remain missing after flooding that has destroyed close to 80,000 homes.

The sanctuary in northeastern Assam state, home to the world's largest population of rare one-horned rhinos and other endangered species, has been especially hard hit.

"Our teams have recovered 225 dead animals since August 12. Of those, 15 were rhinos," Kaziranga director Satyendra Singh told AFP.

"A Bengal tiger also died in a fight with a herd of elephants. He was left injured and later could not walk or swim. It is possible that due to floods, there was a space crunch and it led to a territorial conflict."

Nearly 200 deer, four elephant calves, four wild boars, two water buffaloes and one porcupine were among the other animals found dead in Kaziranga, which is still 20 percent under water, said Singh.

"The toll could rise further," he added.

The mighty Brahmaputra River, which runs through Assam, often breaks its banks during the monsoon leaving marooned animals scrambling to higher, dryer ground.

Conservationists worry that poachers, hunting for lucrative rhino horn, will try and capitalise on the exodus of wildlife from the protection of the jungle.

The park, a tourist magnet home to about 2,500 rhinos, was given a huge publicity boost last year when Britain's Prince William and his wife Kate visited during their tour of India.

But like other parts of the region, it is prone to flooding during the monsoon.

Across Assam and West Bengal, 122 people have died while 69 people have perished in Uttar Pradesh state.

In the Himalaya region in India's northwest, landslides caused by heavy rain have claimed 54 lives, the vast majority in one huge avalanche of mud that swept two buses off a mountainside.

Across the border in Bangladesh, 115 people have died and 5.7 million been affected by raging downpours.