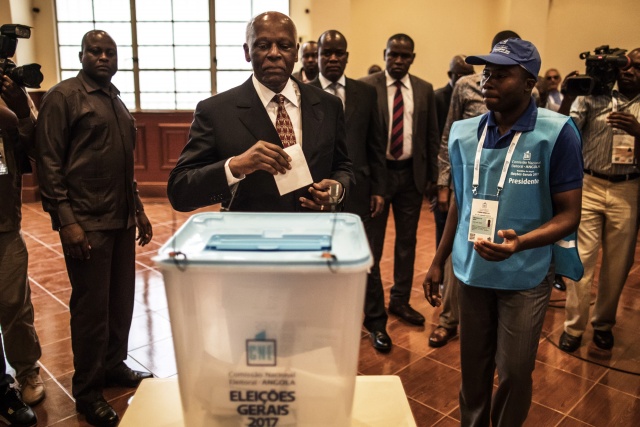 (AFP) - Angolans cast their ballots Wednesday in an election marking the end of President Jose Eduardo Dos Santos's 38-year reign, with his MPLA party set to retain power despite an economic crisis.

The MPLA, which has ruled since Angola's independence from Portugal in 1975, is expected to defeat opposition parties, which are stifled by Dos Santos's authoritarian regime.

His chosen successor however is Defence Minister Joao Lourenco, a loyalist expected to avoid immediate change in a government often criticised for corruption and its failure to tackle dire poverty.

"My mission will be to revive the economy," Lourenco told reporters in the capital Luanda on the eve of the vote.

"If I succeed, I would like to be recognised in history as the man of Angola's economic miracle."

Dos Santos's long reign has seen the end of Angola's bloody civil war that lasted from 1975 to 2002, and a post-war investment boom as the country exploited its oil reserves.

But the flood of money brought little benefit to Angola's poor, and government spending collapsed when oil prices fell in 2014.

Inflation hit 40 percent at the end of last year, when annual growth was less than one percent.

Lourenco, 63, vowed to boost foreign investment and said the MPLA (People's Movement for the Liberation of Angola) would be carried to election victory by "great popular support".

AFP reporters witnessed a slow start to voting at one station in Luanda where Dos Santos and Lourenco are scheduled to cast their ballots later Wednesday.

At a weekend rally in front of thousands of MPLA supporters, Dos Santos, a frail-looking 74, made a brief appearance to endorse Lourenco.

"Dos Santos brought forward his departure to after these elections due to his deteriorating health," Alex Vines, of the Chatham House think tank, told AFP.

"Lourenco is an ideal transitional successor to Dos Santos. He is respected by the military and has not lived a flamboyant lifestyle of many others."

Dos Santos has been dogged by reports of illness. His regular visits to Spain for "private" reasons fuelled criticism that the state of his health was being hidden from ordinary Angolans.

Earlier this year, his daughter Isabel -- who has become a billionaire and Africa's richest businesswoman under his rule -- was forced to deny rumours he had died in Spain.

In the face of ruthless security force crackdowns and a biased state-run media, the opposition parties -- led by UNITA and Casa-CE -- have sought to tap into public anger at the government.

"You who are suffering, you who are in poverty, without electricity, without jobs or nothing to eat -- change is now," Isaias Samakuva, the UNITA leader told supporters on the campaign trail.

Samakuva, 71, took over UNITA after longtime rebel leader Jonas Savimbi was killed in 2002, a death that marked the beginning of the end of the civil war.

Dissent has often been dangerous under Dos Santos, who has been a secretive but inescapable presence in Angolan life for decades.

Angola's next leader "must guide the country out of the spiral of oppression," rights group Amnesty said in a statement.

"Dos Santos' presidency is marked by his appalling human rights record. For decades, Angolans have lived in a climate of fear in which speaking out was met with intimidation (and) imprisonment."

Mateos Simon, 28, a former nurse, told AFP that he lost his job because the hospital was unable to pay him.

"I live in a house where there is no water, no electricity," he said. "The MPLA does nothing for us. Things have to change, now."