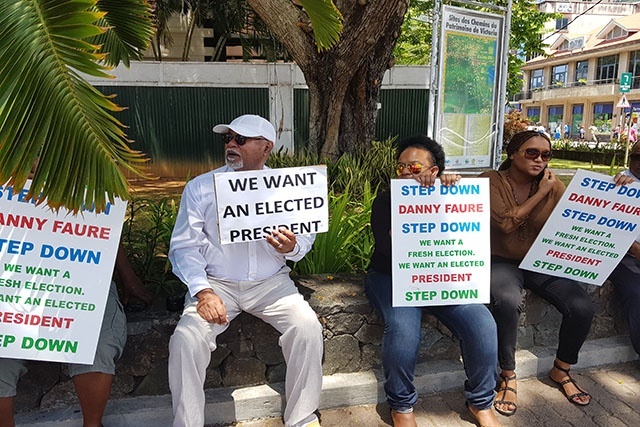 Among the demonstrators was the leader of the political party Lalyans Seselwa, Patrick Pillay. (Rassin Vannier, Seychelles News Agency)

Among the demonstrators was the leader of Lalyans Seselwa, (Seychellois Alliance), Patrick Pillay, who is the also the Speaker of the National Assembly in the island nation's legislative body.

"I am not asking for the president's departure, I want this to be clear. What I want is the presidential election, and that we have an elected president," Pillay told SNA.

It is the second consecutive day that demonstrators met in the capital to demand new presidential elections in 2018.

Pillay said he has responded to a call by one of his alliance's members, who began protesting with banners on Monday.

In a press conference on August 16, Faure had said that there will be no new presidential elections as he is planning to serve his full mandate. Pillay said he doesn't agree with that stance.

“We cannot wait four years for new elections, because this president, whom I like, was not elected but selected by James Michel," Pillay told SNA.

As for Parti Lepep, speaking to SNA, the president of the party, Vincent Meriton, said, "We support President Faure 100 percent, and his leadership in the cohabitation we are now in, is working."

Meriton said that the cohabitation is important for the stability and progress of Seychelles and that "We need stability for us to progress, to ensure development and investment in our country."

The current president of Seychelles, Danny Faure, assumed power on October 16 last year after former President James Michel resigned 10 months into his third and final five-year mandate at the helm of the island nation’s government.

Michel was declared the winner of a December 2015 presidential run-off, winning 50.15 percent of the total votes cast. Faure was Michel’s running mate in the elections and vice president in Michel’s administration.

The Seychelles’ constitution at that time made provision for the vice president to assume power in the event of the president’s death, resignation or removal from office instead of allowing for fresh elections to take place.

This provision of the Constitution, under pressure from the opposition parties in a majority in the National Assembly after last September's elections, has been amended. The new amendment states that in the event that the post of President becomes prematurely vacant, the Vice President would assume the Presidency until an election is held within 90 days.

Meanwhile, Pillay said that the demonstration will continue until President Faure listened to his group's demands.

Lalyans Seselwa, a member of the opposition coalition Linyon Demokratik Seselwa (LDS), has not yet received support from the coalition.

The other majority party of the LDS, the Seychelles National Party (SNP) has not yet taken part in these rallies.

The Seychelles National Party has told SNA that they are going to meet to take a decision on the follow-up to these gatherings.