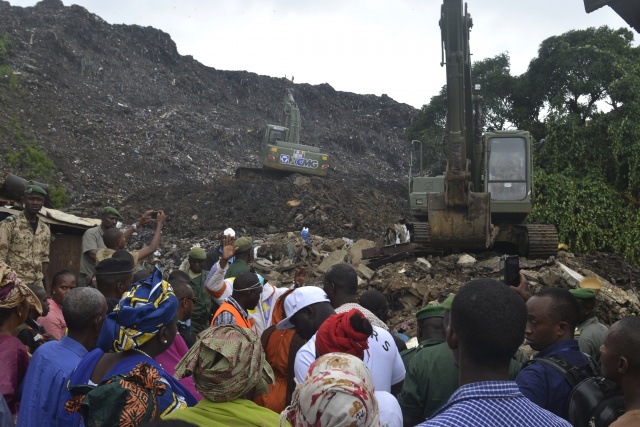 Diggers clears trash from damaged houses after a rubbish dump collapsed the day before following heavy rain on the outskirts of Conakry, on August 23, 2017. Eight people died and dozens were injured in the August 22 accident. Five bodies, including those of two children, were taken to a morgue in Conakry, senior police official Boubacar Kasse said. (CELLOU BINANI / AFP)

(AFP) - Eight people died and dozens were injured in the West African state of Guinea on Tuesday when a rubbish dump on the outskirts of the capital collapsed after heavy rain.

Five bodies, including those of two children, were taken to a morgue in Conakry, senior police official Boubacar Kasse said.

An AFP reporter on the scene later saw three other bodies that were recovered from the landside.

Dozens of injured were taken to hospital, police said.

The incident happened in Hamdallai, located in the district of Ratoma, after week-long heavy rains.

"The rubbish fell onto three homes," said Kasse, the police commissioner for Conakry.

"There are still many people buried, and we have to do everything possible to save them. We have to get diggers in. Access to the area is very difficult."

Police deployed in the area in large numbers as rescue teams strove to look for survivors, the AFP reporter said. Two people were brought out alive.

The incident happened eight days after a mudslide and flooding struck Freetown, the capital of neighbouring Sierra Leone, killing nearly 500 people. According to the Red Cross, at least 600 there are also missing.

The two countries -- among the poorest nations in the world -- are highly vulnerable to seasonal rains, given the lack of urban drainage and the building of homes, many of them ramshackle, on slopes.