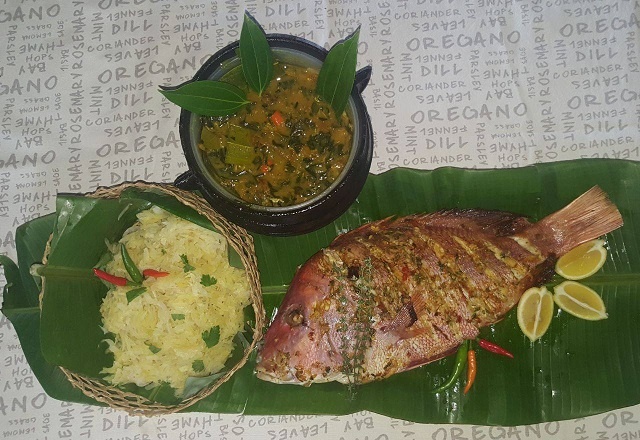 Jose Uranie won first prize among five finalists with his snapshot titled ‘The Grilled Red Snapper’. The main subject in his photo was a grilled red snapper with lemon wedges on the side, served on a banana leaf. Salted fish and moringa curry cooked in coconut milk, and papaya chutney with fresh chilli accompanied the fish.

“I wasn’t expecting to win. I only took part because I enjoy cooking, especially Creole food,” said Uranie, who looks forward to enjoying the trip to Paris with his family.

Uranie thanks those who took the time to like his photo on Facebook, as the highest number of likes a snapshot received was what depicted the winner.

The competition was open to citizens of Seychelles. It started on August 13 and each week Facebook users were given 24 hours every Thursday from 2.00 p.m. local time to vote for their favourite photo placed on STB’s Facebook page. For the final, people got to vote for the five weekly winners.

During the final 24 hours of voting that started on Thursday, August 17, a total of 304 people liked Uranie’s photograph. He came out ahead of Maria Gopal and Stephanie Hoareau, who took second and third place, respectively.

Gopal's second prize, which is two nights for two persons on half-board at Le Meridien Fishermen’s Cove in a junior suite, came after getting 261 likes. She captioned her photo titled ‘The art of Creole food’ as “mouth-watering octopus coconut curry with a side of golden apple salad served with rice in a coconut shell a la Creole style. Not forgetting chilli on the side with lime.”

The third-place winner, Hoareau, gets to enjoy two nights on half board for two persons at the Savoy Seychelles Resort & Spa. Her photo titled 'Typiquement Creole' got 248 votes and was a fresh filleted job fish with sweet potatoes on the side.

The board organised the competition with the aim of getting a diverse selection of Seychelles cuisine photos from participants, to boost and promote one of the island nation’s unique qualities – its melted-pot cuisine.

“STB has achieved its target which was to have a good selection of photos depicting the Creole cuisine for its image library. These images will now be used for our marketing activities in different parts of the world,” said Vahid Jacob, the  Director of Digital Marketing.

He added that only 31 photos were submitted while 56 people registered for the competition which was opened to Seychelles citizens only and had no age restriction.

STB holds a photography competition annually under a different theme each year.