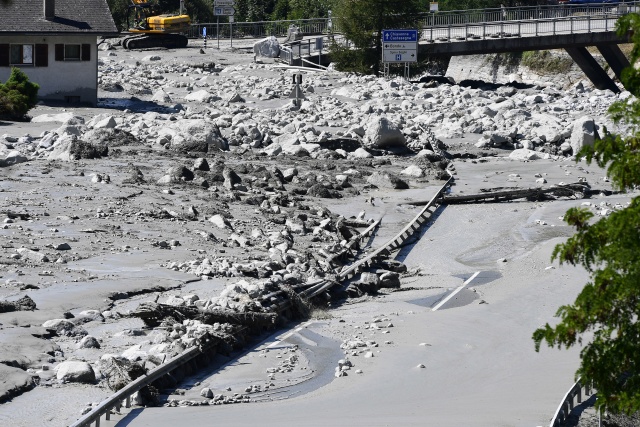 A picture taken on August 24, 2017 shows part of a street and bridge covered by stones after a landslide struck during the night of August 23 in the village of Bondo, Switzerland. Eight hikers are missing after a massive landslide swept away an entire mountainside in the Swiss Alps, ripping apart buildings and forcing the evacuation of a village, police said on August 24, 2017. The landslide, which struck on August 23, sent mud, rocks and dirt flooding down the Piz Cengalo mountain into the outskirts of the village of Bondo, near the Italian border. (MIGUEL MEDINA / AFP)

(AFP) - Eight people were still missing Thursday after a massive landslide swept away a mountainside in the Swiss Alps, ripping apart buildings and forcing the evacuation of a village.

The landslide, which struck on Wednesday, sent mud, rocks and dirt flooding down the Piz Cengalo mountain into the outskirts of the village of Bondo, near the Italian border.

About 100 people were evacuated, some airlifted out by helicopters.

Police confirmed that eight hikers, from Germany, Austria and Switzerland had been in the region of Val Bondasca where the landslide occurred and were missing.

There had been fears about another six people who had been unaccounted for, but Graubunden police spokeswoman Chiarella Piana later told AFP they had been found safe on the Italian side of the border.

No children were believed to be among the missing, Andrea Mittner of the Graubunden police told a news conference.

Images showed an unstoppable mass of thick mud and sludge moving down the mountainside like lava, tearing up trees and demolishing at least one building in its path, and partially engulfing others.

"It was terrible," Elisa Nunzi, 27, who witnessed the landslide from her home in a neighbouring higher-altitude village, told Swiss daily Blick.

She said she first noticed something was amiss when a large flock of birds began flying nervously around the church tower, and then an ear-deafening bang that sent rocks pouring down the mountain.

"There were so many. It did not stop," she said, adding that a blanket of smoke and dust soon covered Bondo.

"You could not see anything for an hour. But you could still hear stones falling down. It smelled of granite," Nunzi said.

Christian Speck, manager of a hotel in Soglio, a few kilometres from Bondo, told AFP that "at breakfast time, my customers and I saw rocks come lose from the mountain side and slide towards Bondo, in a huge cloud of smoke. I immediately warned the commune".

Police and residents said mobile phone coverage in the area was spotty, which might explain why the missing had not been in touch.

The event was so severe that the vibrations set off seismometers across Switzerland, which measured the equivalent of a magnitude 3.0 earthquake, according to the Swiss Seismological Service.

Police said 12 farm buildings, including barns and stables, had been destroyed, while Graubunden's main southern highway was closed to traffic.

The Austrian foreign ministry confirmed that a couple from the country was missing, while Blick reported that four of those being searched for were Germans.

Around 100 people had been evacuated from Bondo and surrounding villages, as well as from Alpine cabins, amid fears of fresh landslides.

- 'People left everything behind' -

Simona Rauch, a Protestant minister at a church in Val Bregaglia, a valley that groups several villages including Bondo, told AFP that residents did not expect to be gone so long.

"People left immediately, leaving everything behind. They didn't bring anything, because they thought they would be returning quickly," she said.

"No one expected this kind of catastrophe."

The evacuees were being housed in private homes and in nearby hotels, including in the village of Castasegna on the Italian border.

Wednesday's landslide was not the first to hit Piz Cengalo.

A large landslide in 2011, which according to Graubunden police was about a third of the size of the latest one, poured down the mountainside and landed in an uninhabited valley.

Following that incident, an automatic debris alarm system was installed.

That alarm was set off when Wednesday's landslide barrelled down the mountain at 9:30 am (0730 GMT), police said.

The last deadly landslide to hit Switzerland was in November 2014, in the city of Davesco-Soragno, killing two people and injuring four others.

One of the worst such incidents in the wealthy Alpine country in recent years happened in 2000, when 12 people perished and four others were declared missing after floods in the southern canton of Valais.