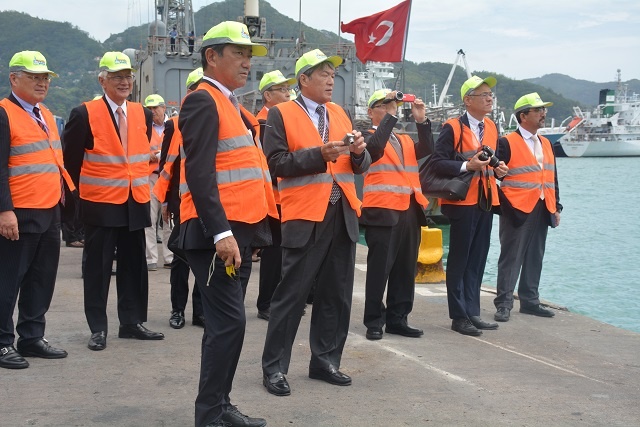 Japan's Nagoya Port Authority dispatches a delegation each year to port cities around the world to promote economic exchange and to attract cruise ships to its port. (Seychelles Port Authority)

(Seychelles News Agency) - A Japanese delegation is in Seychelles to learn more about the facilities in place and the strategies used that are leading to an increase in the number of cruise ships calling on Port Victoria.

The 36-member delegation comprising of representatives from the public and private sectors of Japan’s Port of Nagoya and the Nagoya Chamber of Commerce and Industry toured the Port Victoria facilities on Thursday.

The delegation also met with officials of the Seychelles Ports Authority. The chief executive of the authority, Andre Ciseau, told journalists that the authority regularly receives requests from international organisations to visit Port Victoria because they have heard a lot about its growth.

Seychelles came out on top as a sought-after destination for cruise ships around the world winning the Indian Ocean’s Leading Cruise Destination at the World Travel Awards 2017 which took place in the Maldives last month.

“These cruise ships underscore the increased cruise ship business in Seychelles after overcoming the maritime uncertainty caused by piracy in the Indian Ocean,” said Ciseau. He added that this has led to the Port of Nagoya in Japan showing interest to learn from the Seychelles’ experience in this field.

According to statistics by the Seychelles Port Authority (SPA) for 2017, the island nation has welcomed 15 cruise ships. The projected forecast for the whole year is 33 cruise ships. Seychelles received 27 cruise ships last year.

The senior advisor of the Nagoya Chamber of Commerce, Jiro Takahashi, who is leading the delegation, said the Nagoya Port Authority dispatches a delegation each year to port cities around the world to promote economic exchange and to attract cruise ships to its port.

“Today, we are grateful for this opportunity to learn about the Port of Victoria, which functions not only as a distribution base for the Seychelles but it is a popular port of call for cruise vessels in the Indian Ocean,” said Takahashi.

The special advisor said the visit will serve as an occasion to strengthen relationship, stimulate trade and promote the usage of their port.

Located in the centre of the Japanese archipelago on the east coast facing the Pacific Ocean, the Port of Nagoya is the largest port in Japan in terms of total cargo throughput, which reached 193 million tonnes in 2016. The port plays a major role as a point of entry to Japan, through its connections with approximately 170 countries around the world.

Port Victoria is the main port of the Seychelles, an archipelago in the western Indian Ocean. It opened in 1972 and last expanded in 1986. It is the only port of the island nation that handles the import and export of goods for the country.

Ciseau said that all ports have a key role to play in the strategic development of a country and that, “Although we are a small port, it is important for us to have continuous exchanges with those that are bigger with more sophisticated facilities.”

He added that Seychelles is looking for a sister ship agreement with the Port of Japan, “where we can build new relationships leading to an exchange of expertise and ideas, which in turn will allow for the continuous development of Port Victoria.”

In April last year, the Seychelles’ Port Victoria welcomed the longest vessel in its history, the MS Queen Victoria.

The existing quay of Port Victoria -- currently 270 metres long -- will be extended an additional 330 metres in an expansion project and will be able to accommodate two boats measuring up to 250 metres in length at the same time.

Ciseau said, “This $107 million investment project will bring additional facilities that will boost cultural tourism and the cruise ship business in the country.” the chief executive officer of SPA said.

Seychelles depends largely on tourism, the top pillar of its economy, followed by fishing.

With an Exclusive Economic Zone of 1.4 million square kilometres, Port Victoria is one of the largest tuna transhipment ports in the world, transacting approximately 80 percent of the catch of the purse seiners in the region.

“Tuna transhipment is a domain where Seychelles has a lot of expertise and where Japan is very much interested in learning from,” said Ciseau.