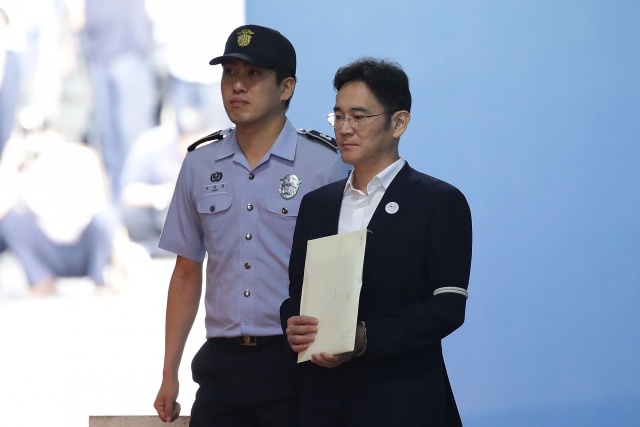 Samsung Group heir Lee Jae-yong leaves the Seoul Central District Court in Seoul on August 25, 2017. The heir to the Samsung business empire, which includes the world's biggest smartphone maker, was sentenced to five years in prison for bribery and other offences in connection with the scandal that brought down South Korean president Park Geun-Hye. (Chung Sung-Jun / POOL / AFP)

(AFP) - The heir to the Samsung empire was convicted of bribery and other offences Friday and jailed for five years in connection with the scandal that brought down South Korean president Park Geun-Hye.

The vice-chairman of Samsung Electronics, 49, arrived at Seoul Central District Court on a justice ministry bus handcuffed, bound with white rope around his dark jacket, and carrying an envelope of documents.

Lee was found guilty of bribery, perjury and other charges related to payments Samsung made to Park's secret confidante Choi Soon-Sil.

In total 8.9 billion won ($7.9 million) was paid in bribes in return for favours including government support for Lee's hereditary succession at the group after his father was left bedridden by a heart attack in 2014, the court found.

Lee had denied the charges, with the defence saying that he was not aware of the payments and did not approve them.

But presiding judge Kim Jin-Dong said: "He offered bribes in response to strong demands by the president."

The court found, however, that Samsung had no alternative but to comply with Park's browbeating in connection with another 22 billion won paid to foundations allegedly controlled by Choi.

Four other top Samsung executives were also convicted, with two jailed for up to four years, and the other pair given suspended terms.

Lee's lawyers said he would appeal, and supporters demonstrating outside the court broke down in tears.

Samsung is by far the biggest of the chaebols, as the family-controlled conglomerates that dominate Asia's fourth-largest economy are known, with its revenues equivalent to around a fifth of the country's GDP.

But while the economy is still growing, social and economic frustrations have mounted over the benefits not being equally shared and the demonstrators who mounted giant candlelit protests against Park last year also targeted Lee and other chaebol chiefs.

The court was deluged with hundreds of applications for the 30 seats in room 417 available to members of the public, which were allocated by lottery.

Park's own trial began in the same room in May, and it also saw Lee's father Lee Kun-Hee convicted of tax and other offences in 2008, receiving a suspended sentence.

The verdict could add impetus to new President Moon Jae-In's efforts to fulfil his campaign pledges of chaebol reform.

The firms have long had murky connections with political authorities in South Korea, and past trials of their leaders have often ended with light or suspended sentences, with courts citing their contributions to the economy.

But Lee's penalty is the longest ever against a sitting chaebol controller, said Chung Sun-Sup, the head of corporate analysis firm chaebul.com.

"Considering the fact that Lee was found guilty on all the five charges, five years in prison is the minimum sentence the court was able to come up with," he told AFP.

The Lee clan directly owns about five percent of Samsung Electronics shares, but maintains its grip on the wider group through a byzantine web of cross-ownership stakes involving dozens of companies.

The court said Park was aware that Lee wanted state approval for a controversial merger of two Samsung units in 2015, seen as a key step to ensuring his accession.

The deal was opposed by shareholders who said it wilfully undervalued shares of one of the firms. But it eventually went through after the national pension fund -- a major Samsung shareholder -- approved it.

Lee has been Samsung's de facto leader since his father fell ill and the sentence leaves the conglomerate facing an extended vaccuum at its highest level, but analysts differ on its impact.

Analyst Chung said major chaebol decisions on large-scale acquisitions or investments "are often endorsed by the patriarch of a ruling family", and with Lee in prison the firm "may move more slowly than before".

But Geoffrey Cain, the author of a forthcoming book on the group, said: "Samsung will not be doomed without Jay Lee. It's up to the specialists to make their own decisions."

During the trial Lee's lawyers and ex-members of the former elite Future Strategy Office, which dictated Samsung's overall direction and major business decisions, sought to portray him as naive and inexperienced.

The group appears to have been unaffected by Lee's absence so far -- he was detained in custody in February -- with flagship subsidiary Samsung Electronics making record profits on the back of strong demand for its memory chips.

Samsung this week unveiled a new model of its Galaxy Note "phablet" as it seeks to leave behind a debacle over exploding batteries in the previous generation of the device, although some analysts were underwhelmed by what they said was a lack of new features.

Its shares have soared in recent months, but closed 1.05 percent down on Friday after the verdict.

The convictions suggest that Park is likely to be found guilty at her continuing criminal trial with Choi, as some of the charges against them are inextricably linked to Lee's offences.

The ousted head of state, who is detained in custody, faces 18 counts including coercion, abuse of power and bribery.

Park has denied all wrongdoing and blamed Choi for abusing their friendship.