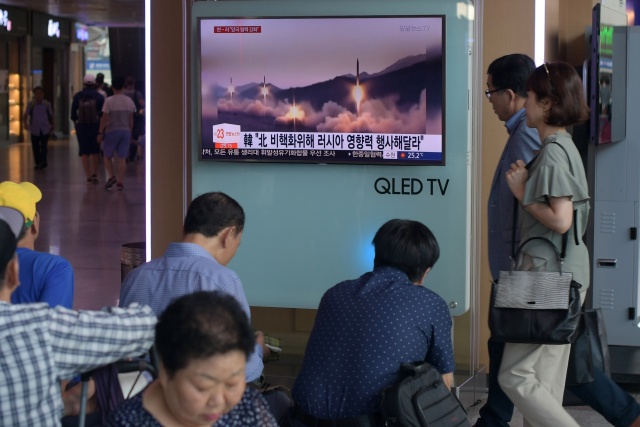 People are seen past a television screen showing file news footage of a North Korean missile launch, at a railway station in Seoul on August 26, 2017.
North Korea fired three short-range ballistic missiles on August 26, the US military said, following weeks of heightened tensions between Washington and Pyongyang. (Ed JONES / AFP)

The launches come as tens of thousands of South Korean and US troops take part in joint military drills in the south of the peninsula, which the North views as highly provocative.

Following an initial US assessment saying that two of the missiles had "failed in flight", a spokesman for the US Pacific Command later said the two weapons had not failed but "flew approximately 250 kilometres (155 miles) in a northeastern direction".

One of the three missiles blew up "almost immediately", with none of the weapons posing a threat to either North America or the US territory of Guam, the spokesman said.

Lee Il-Woo, an analyst at Korea Defence Network, said the launches represented a "low-level provocative act" carried out in response to the US-South Korea exercises, which are seen by Pyongyang as a rehearsal for an invasion of its own territory.

The joint exercises started Monday at a time of heightened tensions between Pyongyang and Washington, after two successful intercontinental ballistic missile (ICBM) launches carried out by North Korea last month apparently brought most of the United States into range for the first time.

Analyst Yang Uk at the Korea Defence and Security Forum told AFP the latest launches by Pyongyang were "carefully calibrated... to avoid revving up tensions too high beyond its control".

Shells hit islands standing in for South Korea's Baengnyeong and Yeonpyeong islands while special forces landed in rubber boats or parachuted in and "wiped out the desperate enemy with various combat methods", the Korean Central News Agency said.

North Korea's ICBM launches last month triggered an intense warning by Trump that Washington could rain "fire and fury" on the North.

Pyongyang then threatened to fire a salvo of missiles towards the US territory of Guam, but later backed away from the plan and tensions had eased.

Trump said Wednesday that Kim Jong-Un was "starting to respect" the United States, hours after Secretary of State Rex Tillerson said talks with the nuclear-armed North over its banned weapons programmes might be possible "in the near future".

White House press secretary Sarah Sanders said Saturday that Trump was aware of the launches and that Washington was "monitoring the situation".

Neither Japan nor South Korea confirmed the US military's description of the weapons fired by North Korea as "ballistic missiles".

South Korea's defence ministry said "unidentified projectiles", fired at 6:49 am (2149 GMT Friday), flew some 250 kilometres towards the Sea of Japan.

"They could be ballistic missiles but they could be rockets. We are now analysing," said Japan's Defence Minister Itsunori Onodera, adding that they did not fly on a "lofted" trajectory.

Under Kim Jong-un, Pyongyang has made rapid strides in its ballistic missile technology in violation of UN resolutions, and it has been penalised by seven sets of sanctions.

Trump has called on China to play a more active role to rein in its neighbour, which relies heavily on the Asian giant for its economic survival.

News Saturday that China's commerce ministry had banned North Korean nationals from setting up new businesses in the country, enforcing recent UN sanctions, followed an announcement earlier this month that Beijing would suspend its imports of iron, lead and seafood from the country.