Iraqi forces poised for victory over IS in Tal Afar 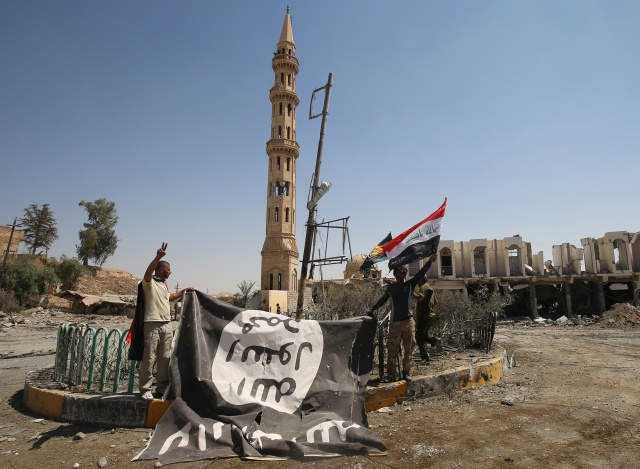 Fighters from the Hashed al-Shaabi (Popular Mobilisation units), backing the Iraqi forces, pose for a photograph with a flag of the Islamic State (IS) group in Tal Afar's Qalea central district during an operation to retake the city from the jihadists on August 27, 2017. Iraqi forces backed by local militia and a US-led coalition were poised to drive the Islamic State group from Tal Afar, dealing another blow to the jihadists. (AHMAD AL-RUBAYE / AFP)

(AFP) - Iraqi forces backed by local militia and a US-led coalition were poised Sunday to drive the Islamic State group from the city of Tal Afar, dealing another blow to the jihadists.

Just a week after authorities announced an offensive to push the jihadists from one of their last major urban strongholds in Iraq, the Joint Operations Command said Iraqi forces held all 29 districts of the city and were pursuing final mopping up operations.

Pro-government fighters could already be seen celebrating, waving Iraqi flags and flashing victory signs as their tanks rolled through the streets.

The offensive comes just weeks after Iraqi forces retook second city Mosul from IS, in their biggest victory since the jihadists seized control of large parts of Syria and Iraq in mid-2014.

Much of that territory has since been retaken with support from coalition air strikes, and IS is also facing a major US-backed offensive against its de facto Syrian capital Raqa.

The loss of Tal Afar, in northern Iraq between Mosul and the Syrian border, will deprive IS of what was once a significant hub for movement between the Syrian and Iraqi components of the self-styled "caliphate" it declared three years ago.

Nearby, a huge crater could be seen on Sunday at the base of the city's main mosque, a testament to the intensity of the air strikes that battered the city.

Surrounding buildings still featured religious slogans written by the jihadists and an IS flag lay upside down on the ground.

Government troops and units of the Hashed al-Shaabi paramilitary coalition launched the assault last Sunday after weeks of coalition and Iraqi air strikes.

Progress in Tal Afar was far more rapid than in Mosul, which fell to Iraqi forces only after a gruelling nine-month battle.

Officials have said they hope to announce victory by Eid al-Adha, the Muslim holiday set to start in Iraq on September 2.

The next target in the area was the town of Al-Ayadieh 15 kilometres (10 miles) north of Tal Afar and strategically located on the road between the city and the Syrian border.

Pro-government forces faced an obstacle course of roads blocked with earth embankments and strategically parked trucks, as well as sniper and mortar fire during the battle for Tal Afar.

Troops also said they discovered a network of underground tunnels used by IS to launch attacks behind lines of already conquered territory, or to escape.

Most of the city's 200,000-strong population had fled after IS seized it. Until its takeover by IS, Tal Afar was largely populated by Shiite Turkmen, whose beliefs are considered heretical by the Sunni jihadists of IS.

Some of the city's former Turkmen residents returned as fighters with the Hashed, like Abu Zineb who accused IS of having "blown everything up" in Tal Afar.

"They destroy homes because of the fighting, but also to stop residents from returning," he told AFP.

The jihadist group has lost much of the territory it controlled and thousands of its fighters have been killed since late 2014, when the US-led international coalition was set up to defeat the group.

Once Tal Afar is retaken, Baghdad is expected to launch a new offensive on Hawija, about 300 kilometres (185 miles) north of the Iraqi capital.

The coalition has announced carrying out strikes near Hawija in recent days, including two that killed IS fighters and destroyed a command post.

IS is also present in the vast western province of Anbar, where it controls several zones along the border with Syria, including the Al-Qaim area.

Despite its losses in Iraq and Syria, IS has continued to claim responsibility for attacks carried out by its members or supporters abroad, including this month's deadly attacks in Spain and knife attacks in Russia and Brussels.

General » Be a reporter: Write and send your article » Subscribe for news alert
Tags: Iraq, conflict