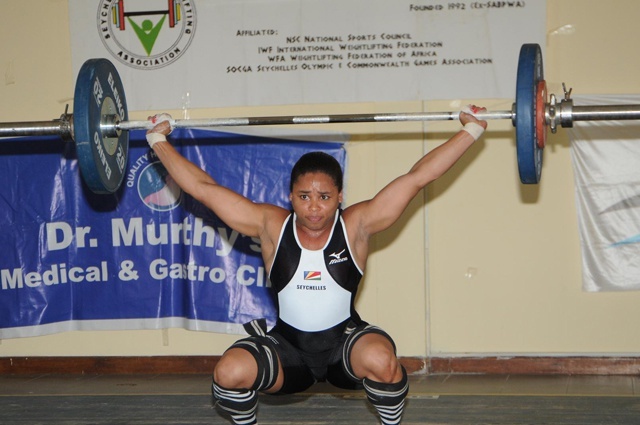 File Photo: Seychellois weightlifter Ruby Malvina is serving a 4-year ban after failing her drug test in 2015. She is unable to compete in any weightlifting event, be it local or international, although she can still train until the ban is over.(Joena Bonnelame, Seychelles News Agency)

(Seychelles News Agency) - Seychelles is hosting the first African Union forum aimed at establishing a framework to fight doping in sports in Africa.

The minister of sports in Seychelles, Mitcy Larue, said at the launch ceremony on Monday that the core values of sports are being endangered due to the increasing cases of doping by African athletes at international competitions.

“As guardians of the values and spirit of sports, we have to be proactive, objective, balanced and transparent in our decision as we wrestle with this scourge,” said Larue.

She added that Africa has received its fair share of doping cases whereby the youths are increasingly pressurised to venture in the dark areas of doping to achieve results.

Seychelles, an archipelago in the western Indian Ocean, has not been spared. Seychellois female weightlifter Ruby Malvina was banned for four years by the International Weightlifting Federation (IWF) after she failed her drug tests in 2015. Malvina is unable to compete in any weightlifting event, be it local or international, although she can still train until the ban is over.

Malvina had been a standout performer with three gold medals at the 9th Indian Ocean Island Games (IOIG) in Reunion, a French department in the region in 2015, followed by two gold medals at the All-Africa Games and at the Commonwealth Weightlifting Championships in India. She had to relinquished all the medals won at the last two events. Malvina was the fourth Seychellois lifter to test positive for banned substances.

The general director of the World Anti-Doping Agency (WADA), Olivier Niggli, said that for the first time countries have gathered to discuss and find ways to amplify the fight against doping in Africa.

Niggli said the use of banned drugs to enhance performance is considered unethical, and anti-doping agency is committed to promote clean sport among athletes.

“We want to start with an investigative programme that we want to integrate in schools curriculum. We need to start with young athletes so that they get proper information on doping,” added Niggli.

Commenting on establishing a regional lab to test for doping, Niggli, said that the plan has to be driven on quality.

“It is not about establishing a lab in each country. It is about quality, and we cannot compromise on that,” added Niggli.

The three-day forum will also review the topic of good governance between governments and all anti-doping organisations in the world.

“All anti-doping organisations need to take an independent position not only toward sport, but toward government also,” the general director said.

A participant at the forum, Joel Dubel, who is also a coach for badminton, said that the forum is a good start to create awareness on doping as he had heard it happening in Seychelles.

“I do not want it to happen in my sport as it will create a bad image not only for the individual involved, but for the whole discipline in general,” said Dubel.