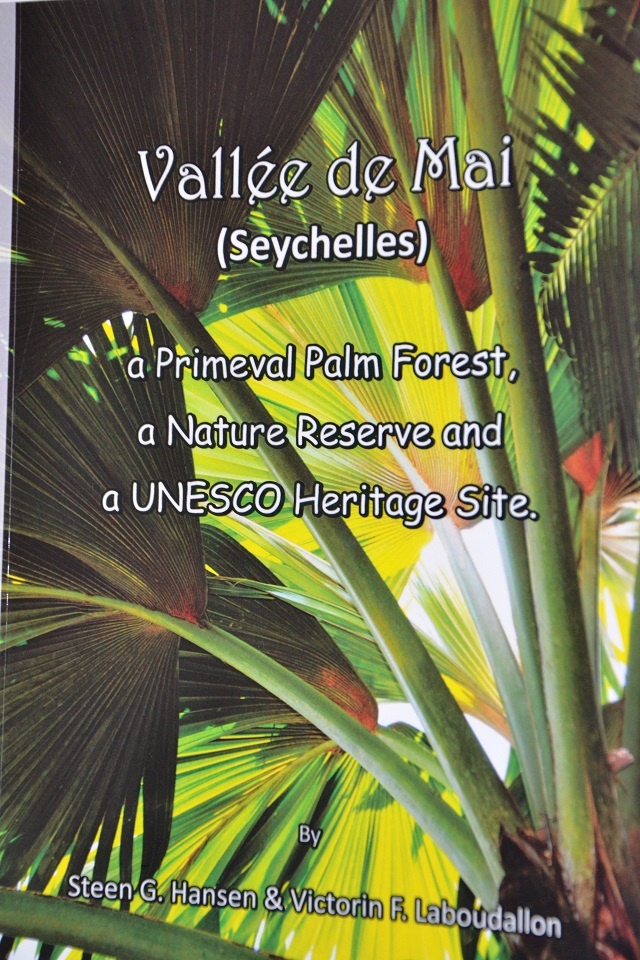 (Seychelles News Agency) - A second book on the Vallee de Mai, a protected reserve that is home to the world's biggest nut and one of two UNESCO World Heritage Sites in Seychelles, has been published 25 years after the first book.

The new 74-page book -- ‘The Vallee de Mai (Seychelles)’ -- is co-authored by Danish national Steen G. Hansen and Seychellois Victorin Laboudallon, a leader in environmental conservation in the island nation.

The ‘Vallee de Mai (Seychelles)’ sheds light on one of the most visited locations of the archipelago, one that exudes natural beauty but also begs for protection against natural and human interference.

“In a hot spot like this, there was a need for a small book, nothing scientific but something that can be both a souvenir and a practical guide,” said Steen Hansen, one of the co-authors.

Located on Praslin, the second-most populated island of the western Indian Ocean archipelago, the Vallee de Mai was declared a World Heritage site in 1983 by the United Nations Educational, Scientific and Cultural Organisation (UNESCO). Covering over 19 hectares of land, and home to the world’s biggest nut -- the coco de mer -- the site is managed by the Seychelles Island Foundation.

The last publication dates back to 1992, entitled ‘Vallee de Mai.’ It was produced by two Seychellois -- Lindsay Chong Seng and Katy Beaver.

Wanting to follow in their footsteps, this new version has merged some ideas of the first publication by including, for example, a folded map as a reference.

The authors also take readers through a long walk in the still pristine forest, an epitome of the Garden of Eden.

“Through each short chapter, the readers are instructed on what to look out for in order to spot the most sought after creatures -- from the black parrot’s nest to the white slugs -- and this, without the assistance of an expert eye,” Victorin Laboudallon told SNA.

A well-known retired environment guru, Laboudallon’s insight and years of experience in the field is reflected in many pages of the book such as the detailed and lengthy chapter on the complicated life cycle of the coco de mer.

Laboudallon’s vision of conservation is also prominent as he references projects being undertaken to safeguard the forest which is believed to have remained free from human interference for millions of years.

The project has been well received by inhabitants of Praslin, which relies heavily on their natural assets to support a booming tourism industry.

“A great book that will be enjoyed by everyone with a passion for nature,” said Brigitte Lesperance.

The Vallée de Mai book can be bought in Seychelles for around $22 (SCR300).

The publication is the third project for Laboudallon and Hansen, who have previously published a book on the flora of Seychelles.

After an updated version, it was followed a few years later by a small book on the plants, reptiles and birds of Aride Island, another nature reserve of the island nation.

The authors are currently working on their fourth project, which will be a first ever book on Curieuse, a designated marine national park since 1979.