Diana mourned on 20th anniversary of her death 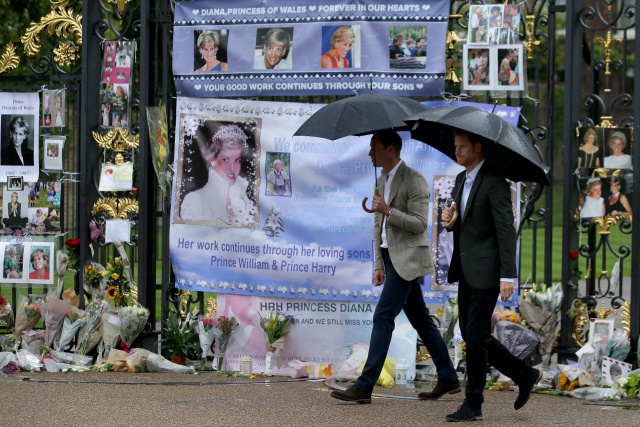 Britain's Prince William, Duke of Cambridge (L) and Britain's Prince Harry look at tributes left by members of the public at one of the entrances of Kensington Palace to mark the coming 20th anniversary of the death of Diana, Princess of Wales, in London on August 30, 2017. Princes William and Harry prepared to pay tribute to their late mother Princess Diana on Wednesday for the 20th anniversary of her death as wellwishers left candles and flowers outside the gates of her former London residence. The Princes visited the Sunken Garden in the grounds of Kensington Palace, which this year has been transformed into a White Garden, dedicated to their late mother, Britain's Diana, Princess of Wales. (Daniel LEAL-OLIVAS / AFP)

(AFP) - Fans and friends of Diana, princess of Wales were to mark the 20th anniversary of her death on Thursday as well-wishers lit candles and paid their respects at the sombre scene of her fatal car crash.

Her children Princes William and Harry on Wednesday greeted the steady stream of well-wishers bringing floral tributes to the gates of London's Kensington Palace, where they grew up with the princess.

And just after midnight in Paris on Thursday, a few braved the rain to be at the Pont de l'Alma tunnel where, precisely two decades earlier, her car smashed into a pillar, taking the life of the most famous woman in the world.

One man lit several candles around the Flame of Liberty monument, which stands above the underpass and has become a shrine to the princess.

"She changed the royal family forever.

"She will always be the people's princess," she said, using the epithet coined by prime minister Tony Blair in the hours after her death.

Diana was killed along with Dodi Fayed, her wealthy Egyptian film producer boyfriend of two months, and his drink-impaired, speeding driver Henri Paul, who was trying to evade paparazzi photographers.

Twenty years on, a few dozen bouquets of flowers and pictures of the princess have been laid at the Flame of Liberty by sympathetic visitors.

"I was a child when she died but I studied her biography," said German journalist Marie Hermann, 25, from Frankfurt.

"l loved Diana and her commitment to charities," she told AFP.

Linda Bigelbach, 61, from Saint Paul in Minnesota, said: "I remember her wedding day and I remember the day she died."

In London, William and Harry, who were 15 and 12 respectively when she died, paid tribute to their late mother on Wednesday and were to spend Thursday privately.

The princes inspected the dozens of bouquets left in front of Kensington Palace.

Earlier they braved torrential rain to visit the White Garden at the palace, created this year to evoke the princess's sense of style and colour choices.

They met with representatives from the charities she supported, including those helping AIDS sufferers and children in need.

Harry told one group of campaigners that his mother's death was a tragedy for them too.

"I can imagine for a lot of you it was like, 'right, here we go, now we've got her, we've got the thirst, we've got the attention, now let's do something'," the 32-year-old said.

"Then suddenly she's snapped away; if I can put it (this way), all of us lost somebody."

They then emerged at the palace gates to look at the heartfelt messages, pictures and flowers left in remembrance of their mother, thanking well-wishers for coming, and placing bouquets given to them.

Handwritten notes on bunches of flowers read: "Diana, a brave princess, your sons have your courage" and "our country was so very lucky to have you".

"I was so sad," recalled a tearful Lena Pettersson, a cleaner from Sweden who had travelled to London for the commemorations.

"She cared about people, she was very special. Her sons are continuing her work, they are just like her."

Helen Zacharia, 62, who tied a bouquet to the gates, told AFP: "I come down every year because I've always liked Diana. I've never met her but if I don't come down I feel very sad. Everyone loved her."

The princess was to be remembered on Thursday at the Mildmay Mission AIDS hospital in London, visited regularly by Diana when it was a hospice caring for HIV patients.

The institution will hold a remembrance service and past members of staff will share their memories of Diana, as well as dancer Wayne Sleep who famously performed with the princess in 1985.

Her untimely death at the age of 36 shocked the world.

The complex life of Diana -- a shy, teenage aristocrat who suddenly became a global icon -- and her tragic death still captivates millions across the globe.

Diana wed Prince Charles, the heir to the throne, in 1981, but their marriage collapsed under the strains of public duty and their incompatibility.

She was cast out of the royal family in the 1996 divorce she had inadvertently made inevitable with an explosive tell-all television interview.

However, the monarchy's shining star was undimmed, her reputation sealed as a fashion icon, charity campaigner, humanitarian and a self-styled "queen of hearts".

Prince Charles to stand in for Queen at UK parliament opening