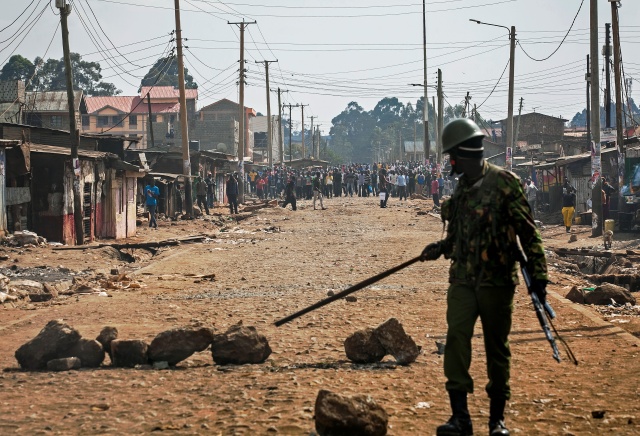 Kenyan riot police officers clash with supporters of presidential candidate Raila Odinga on August 10, 2017 in the Kawangware slum in Nairobi . Kenya's main opposition coalition demanded on August 10 that its candidate Raila Odinga be declared president, claiming it had evidence he had won an election that has already led to angry protests over fraud claims. The latest allegations by the National Super Alliance (NASA) are likely to further ratchet up tensions a day before official results are expected from the August 8 vote. (PATRICK MEINHARDT / AFP)

(AFP) - Kenya's Supreme Court will rule Friday on whether last month's presidential election, which the opposition claims was riddled with irregularities, will be annulled or upheld.

Days of sporadic protests erupted after President Uhuru Kenyatta, 55, was declared the winner of the August 8 vote with 54 percent, leading to the deaths of at least 21 people.

Opposition candidate Raila Odinga, 72, alleged fraud and took his complaints to the seven Supreme Court judges, and some Kenyans fear renewed protests if he loses his attempt to overturn the result.

It is the third time in a row that Odinga has cried foul, after claiming he was cheated out of rightful victories in 2007 and 2013.

The disputed 2007 election led to politically motivated ethnic violence in which over 1,100 people were killed. In 2013 Odinga took his grievances to court and lost.

The court's ruling is final and will lead to either confirmation of Kenyatta's victory, after which he will be sworn in on September 12, or an annulment of the result that would require a new election within 60 days.

A NASA official and lawyer, James Orengo, argued that irregularities, including unsigned and fake tally forms, hacked servers and deliberate miscounting, had affected around one-third of the 15.5 million votes cast, and called for Kenyatta's victory to be declared invalid.

But lawyers for the election commission and Kenyatta countered that errors were simply "clerical" mistakes and technicalities that did not affect the outcome of the vote.

A report filed by the court registrar found a number of errors in the 41,451 polling station tally sheets -- known as form 34A -- and in the 291 form 34B constituency tally sheets, some of which were unsigned, not stamped, illegible or lacking serial numbers or watermarks.

In addition, the registrar's report found that the electoral commission failed to provide full court-ordered access to its servers, which NASA had demanded in order to back its allegations of hacking.

The opposition also argued that in the days between the election and the publication of all the forms, as required by law, the tallies were doctored to fit a pre-determined result handing Kenyatta victory.

Having failed to win his case at the Supreme Court in 2013, Odinga had initially ruled out legal action this time around, but after the resulting violence that killed at least 21 people, mostly by police, he changed his mind.

The violence was short-lived and restricted to opposition strongholds in the slums of the capital Nairobi and the western city of Kisumu, but there are fears the Supreme Court ruling might reignite the protests.