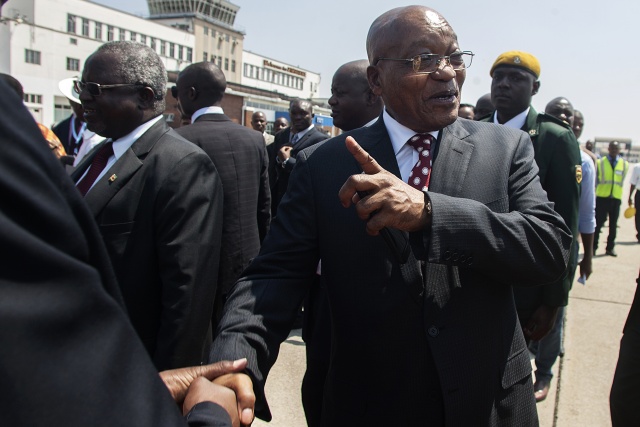 South African president Jacob Zuma (R) is greeted upon his arrival for an official state visit at the Harare International Airport on November 3, 2016 in Harare. South African President Jacob Zuma on November 3 faced increasing calls to resign after a damaging probe unearthed further evidence of alleged corruption at the top of the ANC government. The country's anti-graft watchdog ordered a judicial inquiry into possible criminal activity in Zuma's relationship with the Guptas, a wealthy Indian family accused of wielding undue political influence. (JEKESAI NJIKIZANA / AFP)

Duduzane Zuma, a 35-year-old businessman with a playboy reputation, is alleged to be the key contact between his father and the Gupta family, who are accused of wielding undue influence over the government.

Duduzane says he first met the Guptas at his father's house in the early 2000s.

He was soon employed as a trainee in the Gupta family business before rising rapidly to become a director of one of their companies -- at the same time as his father rose to power in 2009.

Duduzane Zuma has tried to keep a low profile, but this week he became the focus of rowdy parliamentary clashes as Economic Freedom Fighters (EFF) opposition lawmakers taunted his father.

They constantly addressed President Zuma in Zulu as "Duduzane's father", mockingly claiming it was a term of respect.

Duduzane also gave a rare television interview, aired on Thursday, saying that he had worked hard to earn promotion to the top of the Gupta business network.

"I don't think they wanted anything from me. They liked me. As I liked them," Duduzane told the BBC, sitting in a Dubai hotel room.

"There's nothing untoward about it... It was just a meeting of minds -- they understood me, I understood them."

President Zuma, who has at least 20 children and has been married six times, is due to stand down in 2019.

But he has been engulfed in corruption scandals that have fuelled growing calls from within the ruling ANC party for him to resign.

Among the many allegations, he is accused of unfairly granting lucrative government contracts to the Guptas and even taking their orders over ministerial appointments.

EFF lawmakers are not the only critics of the president who see Duduzane as a chink in Zuma's armour.

"Duduzane provides access to his father (and) amassed a vast fortune," OUTA alleged.

"It is difficult to imagine an innocent explanation for Duduzane Zuma's meteoric rise."

A report by South Africa's anti-graft ombudsman last year detailed a meeting when Duduzane was present in which Ajay Gupta is alleged to have offered the deputy finance minister a $45 million bribe.

The meeting was at the Guptas' headquarters in Saxonwold, an upmarket district of Johannesburg.

The high-security address has been the centre of their sprawling business spanning computers, mining, media, technology and engineering.

But the Guptas say they are now selling up as wary banks have shut down their accounts amid the mounting allegations.

Duduzane is following suit, saying in a public letter published on Monday that he was selling his shares in Gupta companies "to be able to focus my time on clearing my name".

In the letter, he launched a vicious attack on former finance minister Pravin Gordhan, who served under President Zuma and was seen as a bulwark against corruption.

"How do you sleep at night?" Duduzane asked Gordhan, accusing him of trying to "destroy" him and the Guptas.

A slew of leaked emails in recent months has piled further pressure on Duduzane -- and his father.

They reveal that the Guptas allegedly paid for Duduzane's foreign holidays, his 2015 wedding and helped him to buy property.

According to the emails, when Duduzane crashed his Porsche in 2014, the first person he called was Rajesh Gupta. A woman in another vehicle was killed in the accident.

President Zuma faces a tough fight even after leaving office, with the looming threat of almost 800 corruption charges against him being reinstated, over a multi-billion dollar arms deal in the 1990s.

Duduzane, like his father, may spend many years defending his reputation.

Asked if he feared ending up in jail, he said: "It just crossed my mind now (for) the first time. No."